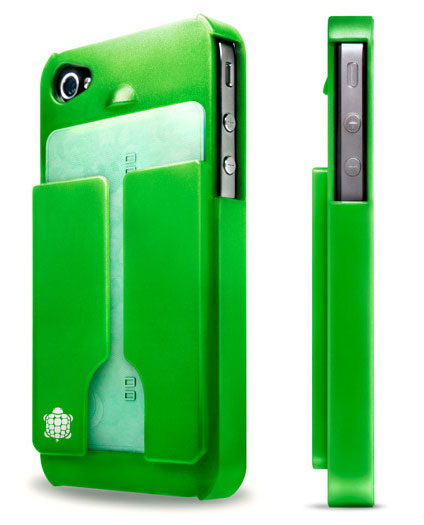 I understand that it’s difficult to differentiate your product in the realm of cell phone cases, but I’m not completely sure that TRTL BOT is going about it in the right way. They’re just tacking on features that I’m not sure I’d want in an iPhone 4 case.

Let’s start with the bigger head-scratcher. The TRTL BOT Minimalist 4 for the iPhone 4 is supposed to replace your wallet. Serving two functions, the Minimalist 4 will protect your iPhone, but it also has a money holder in the back. Yes, that’s what you want to do: proudly display your wad of Benjamins when you take that call in the shady part of town.

It’ll hold up to three credit cards and comes in your choice of black, white, green, pink, or sky blue. The added bulk isn’t exactly desirable, but you might be okay with that. At $29.95, it’s not terribly expensive either… until you get mugged for holding your cash up against the side of your face.

The other case, the TRTL BOT Stand 4, might be a little more useful. It borrows some kickstand inspiration from certain HTC Android phones, propping up the iPhone 4 for your FaceTime and video-watching sessions. It’s available in the same colors as the Minimalist 4 and sells for the same $29.95. It’s also a shocker to see these are made in USA. Way to go TRTL BOT!