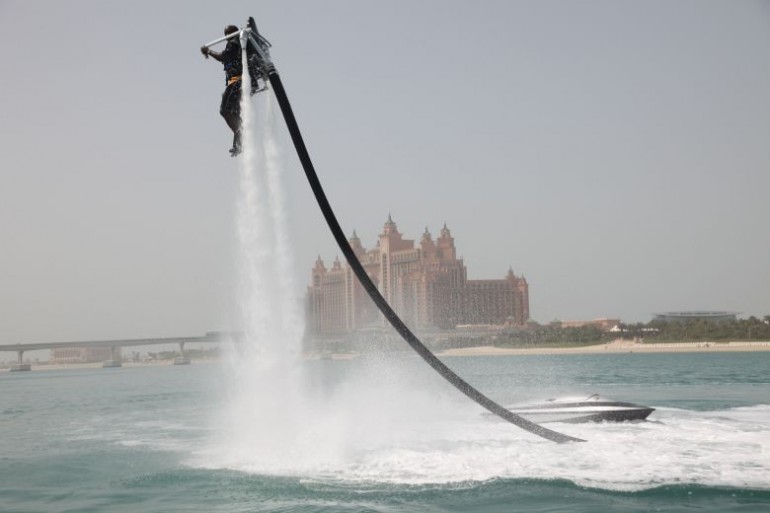 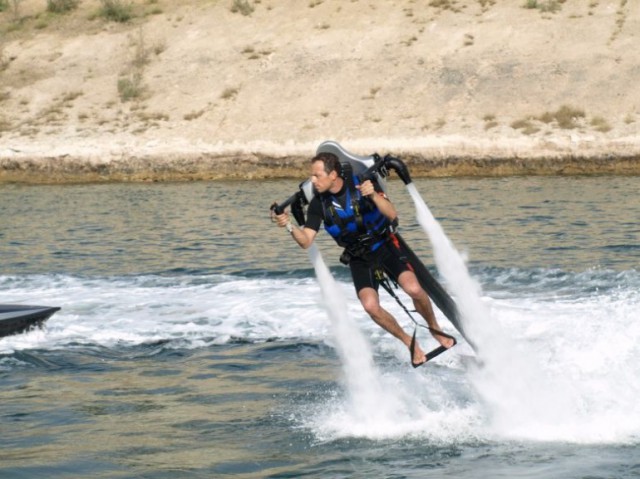 If you’ve ever dreamed of flying around with a jetpack, that dream will soon become a reality… if you happen to have $99,500 burning a hole in your pocket. As a quick refresher, the
JetLev R200 jetpack straps onto your back, sucking in the surrounding water and spitting it out at such force that you get launched several feet in the air. You’ll be tethered to a small autonomous boat that contains the propulsion engine, fuel, and all doo-dahs that make this system possible. The water gets channeled from this boat to your jetpack via a 33-foot hose.

How much power does this generate? Quite a bit, actually. The Jetlev can generate up to 500 ft-lbs of thrust from its four-stroke 250hp engine, though that’s been dialed down to 430 ft-lbs for some inexplicable reason. Even then, a 150-pound user can get up to 28 feet in the air, traveling at up to 22mph. You get about one hour of full throttle smiles via the 26-gallon tank; cruise more slowly and it’ll last two to three hours.

Is this useful? Not in the least. It’s meant to be a recreational toy and that’s exactly how it’s going to be sold. Yeah, it’s a rich man’s toy, but if being rich means I get a jet pack, then I want to be rich. Expect Jetlev to ship about 70 units starting this month to North and South America, Caribbean, Asia-Pacific, and South Africa. Later in the year, they’ll start shipping to Australia, New Zealand, South Africa, Brazil, Argentina, and other Central America and Asia Pacific markets.