Intertainment Media acquired mobile software and app developer, Commobility, on April 13, 2011 to expand their business into the mobile and portable computing areas. Intertainment Media intends to release a mobile version of their Ortsbo translation software, a desktop application that integrates with platforms like MSN and Facebook to translate conversations in real-time.

The Ortsbo iPhone app is currently undergoing review to be available on the Apple App Store. The Commobility and Intertainment Media teams are also working on apps for platforms including Android, BlackBerry and Windows Phone, which are scheduled to launch summer 2011.

Some of you might be thinking, why use Ortsbo when Google Translate does the same thing? Well, it’s not quite the same. From my personal experience, which has been trying to translate Croatian into English and Spanish into English, the translation strays so far from the original meaning it’s often incomprehensible.  As well, with Ortsbo, you don’t have to waste time copying and pasting your words from Google Translate, as the translations go right into Facebook or MSN’s chat window. With Ortsbo, speaking a different language happens with the push of a button.

I chose to connect Ortsbo with Facebook, which was really simple. It only requires your Facebook username, which can be found under account settings of your Facebook account. To log in, you just put @chat.facebook.com at the end of the username. There are over 50 languages available for translation. I picked English as the language I would receive communication in. After logging in, I opened a chat window with one of my Croatian cousins, and chose Croatian as the output language.

I was very pleased that my English had been translated into Croatian with the proper diacritic marks. I was understood and managed to sustain a conversation without any significant loss of meaning. Ortsbo made it extremely easy to carry on a conversation with my cousin. It enabled the conversation to be much quicker and smoother, as I would usually spend time trying to figure out how to phrase something in Croatian, or looking it up on the internet. There was no lag between translations; it was fairly instant.

Some of my sentences were fragmented and grammatically incorrect. As well, certain words were not translated and just left as they were. However, despite the grammar errors, the meaning was grasped. It might help that I speak Croatian and that she speaks English. If I was speaking with someone who speaks Japanese but not English, I imagine I would have much more trouble maneuvering the broken and untranslated words. In such an instance, I might have to jump to Google Translate, which would defeat the purpose. As well, I had to log into Facebook and open a chat window because in Ortsbo’s chat window, everything I typed was just in English, so I wasn’t sure if it was translating to Croatian. I would have preferred to see both the original message and the translation appear underneath, to be sure my words were being translated.

While Ortsbo’s desktop software is currently free, the mobile app will be a paid one. I don’t see myself paying for the mobile app, as I can use the software online for free. It would prove useful for people who need to stay in contact with coworkers or employees, who I’m sure would be willing to dish out the price, as they can use the software when they are away from a computer.

Intertainment Media is holding off on updates about the app until it’s officially approved by Apple, which should be within the next 30-40 days. We’ll keep you posted on when the app is approved. 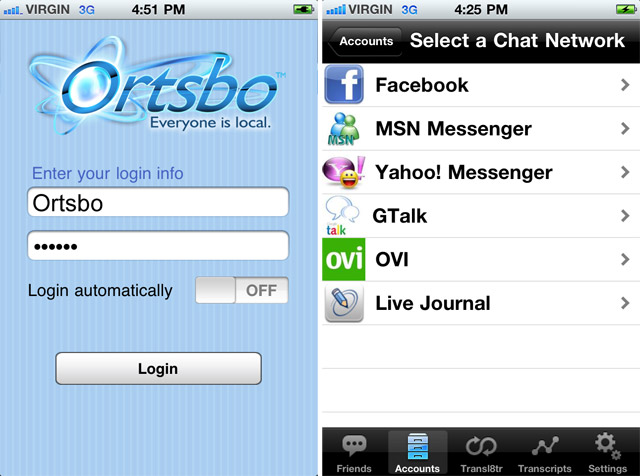