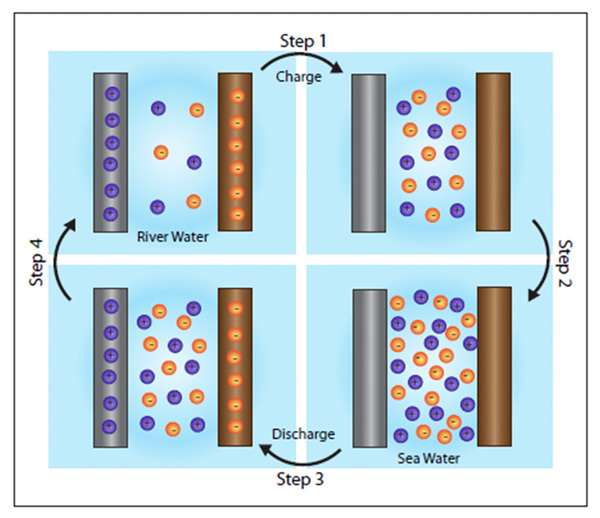 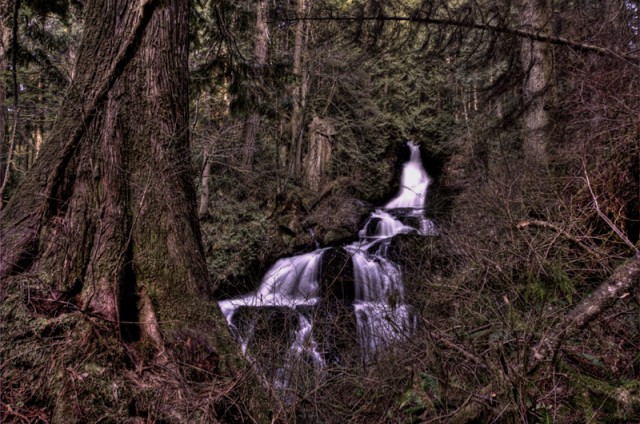 Stanford researchers have developed a battery that takes advantage of the difference in the amount of salt between freshwater and seawater to produce electricity. Potential sites for a power plant that utilize the battery would be anywhere freshwater enters the sea, such as river mouths or estuaries.

The limit to taking advantage of this technology on a large scale is that while there is a significant amount of seawater available on Earth, there is a limited amount of freshwater. Less than three per cent of Earth’s water is freshwater, and the majority of it is trapped in glaciers. Still, the researchers estimated that if all the world’s rivers were put to use, the batteries could supply about 2 terawatts of electricity annually, which is about 13 per cent of the world’s current energy consumption.

The battery consists of one positive electrode and one negative electrode, as usual, immersed in a liquid containing electrically charged particles, or ions. In water, the ions are sodium and chlorine, which make up salt.

The battery is first filled with freshwater and a small electric current is applied to charge it. The freshwater is then drained and replaced with seawater. Because seawater is salty, it contains 60 to 100 times more ions than freshwater, which increases the voltage between the two electrodes. Basically, more salt means more voltage, which makes it possible to get more electricity than the amount used to charge the battery. Charging at low voltage in freshwater and then discharging at high voltage in sea water creates an energy gain.

Once the discharge is complete, the seawater is drained and replaced with freshwater and the cycle can begin again. In the lab experiments, the team achieved 74 per cent efficiency in converting the potential energy in the battery to electrical current. The team predicts that with simple modifications, the battery could be 85 per cent efficient.

To enhance efficiency, the positive electrode of the battery is made from nanorods of manganese dioxide that increases the surface area available for interaction with the sodium ions by roughly 100 times compared with other materials. The nanorods make it possible for the sodium ions to move in and out of the electrode with ease, which speeds up the process.

To prevent environmental damage, the researchers suggested the site could be located miles away from the river mouths. The system would detour some of the river’s flow to produce electricity, and then release it into an area where the two waters are already mixing.

The fresh water doesn’t even have to come from a river. Storm runoff could also be utilized in the method, and the researchers are considering trying the experiment with treated sewage. According to the researchers, a power plant operating with 50 cubic meters of freshwater per second could produce up to 100 megawatts of power. That would be enough to provide electricity for about 100,000 households.

The group considered several countries and regions for the site, including Canada and the United States. Six countries, Brazil, Russia, Canada, Indonesia, China and Colombia, have 50 per cent of the Earth’s freshwater reserves. The Stanford scientists are working on modifications to get the battery ready for commercial production. For example, the silver electrode they use is expensive, and they hope to develop a cheaper alternative.