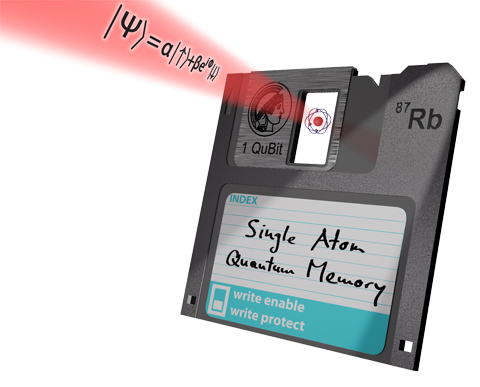 Researchers with the Max Planck Institute of Quantum Optics in Garching, Germany have managed to store quantum information in a single atom. The researchers wrote the quantum state of single particles of light, called photons, into a rubidium atom and read it out again after a certain storage time. This technique could potentially be used to design powerful quantum computers and to network them with each other across large distances.

The benefits of quantum computers include being able to process diverse pieces of information, which would be stored in a very tiny space. The researchers found a way for quantum information to be exchanged between single atoms and photons in a controlled way.

Irradiating the rubidium atom with the control laser caused it to re-emit the photon. In most cases, the quantum information in the read-out photon agreed with the information originally stored. According to researchers, the method gives a true quantum memory.

The storage time, meaning how long the quantum information in the rubidium can be retained, was approximately 180 microseconds. The researchers said that longer storage time will be needed for the method to be used in a quantum computer or a quantum network, but it could one day be an essential component of a future quantum internet.