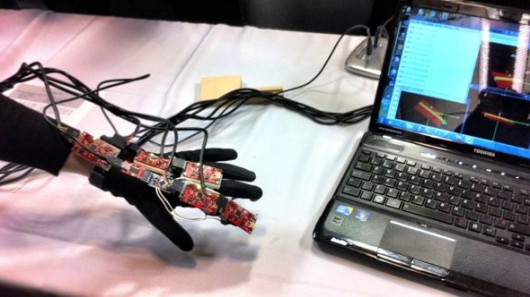 People who have suffered strokes are often left with physical impairments, including partial or total paralysis on one side of the body, which means a loss of muscle control. In an attempt to aid rehabilitation, four McGill Engineering undergrads developed a biomedical sensor glove that can help stroke patients recover hand motion by playing video games.

The glove allows patients to exercise hand movements in their homes with little supervision, and cuts down on hospital visits and costs. Accompanying software sends information directly to the doctor’s office. The software generates 3D models while the patient plays video games, allowing the patient to monitor their own progress. Developed by students, the product was created in response to a design request from startup company Jintronix Inc. who creates medical devices that utilize virtual reality technology to assist the rehabilitation of patients suffering from motor disabilities.

The glove can track the movements of the wrist, the palm and the index finger using several inertial measurement units. Similar gloves cost up to $30,000, but the students used more accurate and less expensive sensors, bringing the cost down to $1000.

Jintronix, Inc. has submitted the project to Grand Challenges Canada, a not-for-profit that works to improve the health of people in developing countries, in the hopes that they will receive funding for further development. Grand Challenges Canada awards $100,000 CDN to an innovative idea that addresses persistent health challenges in the developing world. Stroke is a problem in many developing countries, not just North America. In India for example, the average annual incidence rate of stroke is about 145 per 100,000 population.