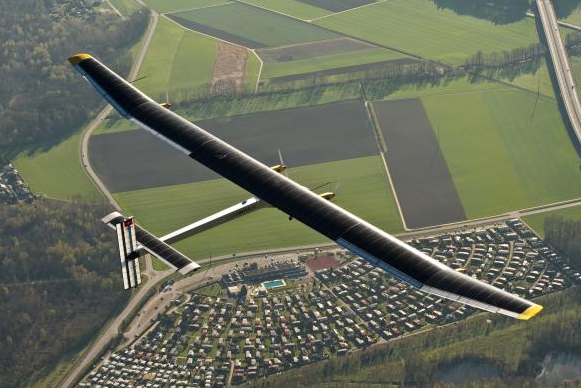 We are on the way to reaching new heights of innovation with solar energy technology.  Solar Impulse, a program based out of Switzerland aims to fly around the world in a solar plane. Their next big step is an international flight from Payerne Switzerland to Brussels Belgium, a 500 km soar.

The carbon fiber Solar Impulse HB-SIA Plane has a 63.4 meter (208 feet) wingspan (equal to the Airbus A340) holds an array of over 11000 solar cells evenly distributed across the top of the wings and the horizontal stabilizer.   That’s over 2000 square feet of solar panels up in the air.  These collect as much solar energy during the day as possible and stores that energy into ultra lightweight battery packs, the plane wings are made of carbon fibre to reduce weight while increasing strength and stability.

The question of energy defines the entire project. At midday, each square metre of land surface, in the form of light energy, receives the equivalent of 1000 watts, or 1.3 horsepower of light power. Over 24 hours, this averages out at just 250W/m². With 200m² of photovoltaic cells and a 12 % total efficiency of the propulsion chain, the plane’s motors achieve an average power of no more than 8 HP or 6kW – roughly the amount of power the Wright brothers had a available to them in 1903 when they made their first powered flight. And it is with that energy, optimized from the solar panel to the propeller, that Solar Impulse is striving to fly day and night without fuel!

This launch is a major milestone in its mission to make it around the world on just the power of the sun.  While we are still a couple years away from a global circumnavigation, the real set back according to the team is a lack of efficient battery technology.  Quite remarkable considering it’s already capable of remaining airborne for 36 hours at a time.