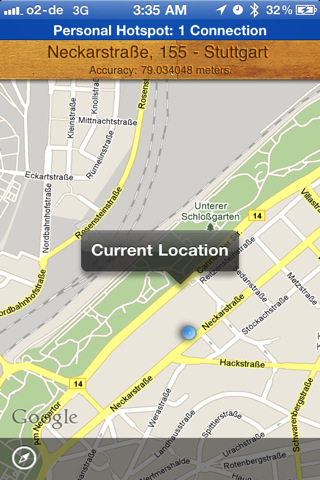 The tablet wars are indeed heating up with Android making up some hefty ground, but the iPad is still the reigning king. Maybe you’ve picked up one of the WiFi-only models because you’re not interested in paying for a separate data plan, but now you’re missing out on the GPS side of the equation.

Not anymore. At least, not if you have an iPhone too. Enter the AirLocation app. Basically, you open up the app on both devices and then you tether your iPad to your iPhone. You’ve done that second part before to share your mobile Internet connection, but since you have the AirLocation app open, you’re now also sharing the GPS signal.

This can be fantastic for things like Google Maps or even Foursquare, should you feel so inclined, since you get a bigger screen without having to fork out the extra money for the 3G/GPS model. Then again, you could just do the GPS thing on your iPhone, but having a bigger screen can prove useful sometimes. After all, that is why you got an iPad in the first place, right?

AirLocation is a buck through the App Store and doesn’t seem to be getting the greatest reviews.