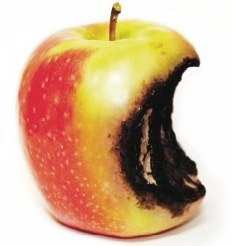 It’s not often we see a response from Apple on controversial topics like privacy, but their latest Q&A press release is a bit like a slap in the face to anyone with an IQ above 50 and contradicts the very essence of a secure operating system environment.

The news spread last week when it was discovered that the iPhone and iPad 3G automatically recorded your location data everywhere you went. So what, big deal, well, that data could be accessible by nearly anyone. Giving raw GPS data with timestamps of your whereabouts to who knows who.

I just came back from a trip the other day where I was “randomly” scanned for bomb particulites at every security checkpoint I encountered. How random is that. I never make it easy on the complacent officers when I argue with them politely with my overgrown facial hair and tanned skin, so they offered up some information to me in order to save their dignity as I accused this of not being a random search, “when you walk through the gate we get an indicator light up on the machine that is triggered by someone in one of our three security offices watching you on 20 different cameras. Basically that’s how it works. ” the officer explained.  That’s a massive sidestep if you ask me, just admit it, you’re all part of the same crazy  money gobbling tax dollar siphoning airport security program.  I don’t care if its your buddy up in the computer lab, or you down here in the pits.  And now, Apple is side stepping this one by saying “The iPhone is not logging your location,” but it’s “maintaining a database of Wi-Fi hotspots and cell towers around your current location, some of which may be located more than one hundred miles away from your iPhone, to help your iPhone rapidly and accurately calculate its location when requested.”   So tell me, why does your device need to know the location of a hotspot or cell tower?  There’s no explanation or benefit of this that I am aware of, at least not in a long-term situation.  But it sure sounds like a twist in the yellow brick road to me. Basically, a timestamped database of your exact location and time according to Apple is “not tracking your location” while actually “tracking your location.”

How do they plan to handle this? In an inadvertent way of not admitting guilt, but accepting that something needs to be changed, Apple will release an iOS update that will reduce the size of Wi-Fi hotspot and cell tower data cached on your iPhone or iPad 3G and wipe the cache when the Location Services are turned off. The cache will also become encrypted. It’s still tracking you now, so until an Apple update comes down the pipe, you’re where about’s are known.  This Apple is getting more rotten by the day.

CUPERTINO, Calif.–(BUSINESS WIRE)–Apple would like to respond to the questions we have recently received about the gathering and use of location information by our devices.

2. Then why is everyone so concerned about this?
Providing mobile users with fast and accurate location information while preserving their security and privacy has raised some very complex technical issues which are hard to communicate in a soundbite. Users are confused, partly because the creators of this new technology (including Apple) have not provided enough education about these issues to date.

4. Is this crowd-sourced database stored on the iPhone?
The entire crowd-sourced database is too big to store on an iPhone, so we download an appropriate subset (cache) onto each iPhone. This cache is protected but not encrypted, and is backed up in iTunes whenever you back up your iPhone. The backup is encrypted or not, depending on the user settings in iTunes. The location data that researchers are seeing on the iPhone is not the past or present location of the iPhone, but rather the locations of Wi-Fi hotspots and cell towers surrounding the iPhone’s location, which can be more than one hundred miles away from the iPhone. We plan to cease backing up this cache in a software update coming soon (see Software Update section below).

5. Can Apple locate me based on my geo-tagged Wi-Fi hotspot and cell tower data?
No. This data is sent to Apple in an anonymous and encrypted form. Apple cannot identify the source of this data.

6. People have identified up to a year’s worth of location data being stored on the iPhone. Why does my iPhone need so much data in order to assist it in finding my location today?
This data is not the iPhone’s location data—it is a subset (cache) of the crowd-sourced Wi-Fi hotspot and cell tower database which is downloaded from Apple into the iPhone to assist the iPhone in rapidly and accurately calculating location. The reason the iPhone stores so much data is a bug we uncovered and plan to fix shortly (see Software Update section below). We don’t think the iPhone needs to store more than seven days of this data.

7. When I turn off Location Services, why does my iPhone sometimes continue updating its Wi-Fi and cell tower data from Apple’s crowd-sourced database?
It shouldn’t. This is a bug, which we plan to fix shortly (see Software Update section below).

9. Does Apple currently provide any data collected from iPhones to third parties?
We provide anonymous crash logs from users that have opted in to third-party developers to help them debug their apps. Our iAds advertising system can use location as a factor in targeting ads. Location is not shared with any third party or ad unless the user explicitly approves giving the current location to the current ad (for example, to request the ad locate the Target store nearest them).

Sometime in the next few weeks Apple will release a free iOS software update that:

reduces the size of the crowd-sourced Wi-Fi hotspot and cell tower database cached on the iPhone,
ceases backing up this cache, and
deletes this cache entirely when Location Services is turned off.
In the next major iOS software release the cache will also be encrypted on the iPhone.