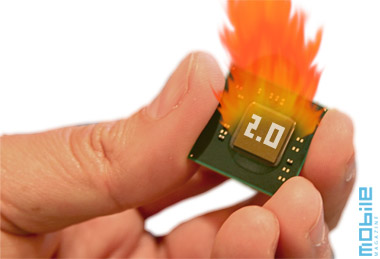 I remember when the first set of Qualcomm Snapdragon processors broke the 1GHz threshold. That was monumental. Soon, we will have dual-core Nvidia Tegra 2 powered smartphones at hour fingertips. This is already being out done by phones with 1.2GHz and even 1.4GHz processors mind you. But they’re all going to get usurped again. By Samsung.

In this latest stage of upstaging, Samsung made it clear that they will come forward with dual-core 2GHz processor powered smartphones. When considering processing power alone, that could put the phone on par with quite a few PCs on the market. Your laptop just got out clocked by your phone? Sweet!

Samsung is saying that their 2GHz dual core wonder will be ready in 2012 and is likely going to be marketed under the new Exynos brand. What’s interesting is that Samsung is now looking to sell its mobile processors to other smartphone manufacturers, so we might be seeing a Samsung Exynos 2GHz dual core powered smartphone from HTC, Motorola, Acer, LG, or any number of other companies.

Yes, having more speed can sound appealing, but I’d be really concerned about how they handle those slowly evolving batteries. Hopefully you’re not reaching for a power outlet every couple of hours. People on the EVO 4G love their phones, but they get pretty frustrated with battery life.