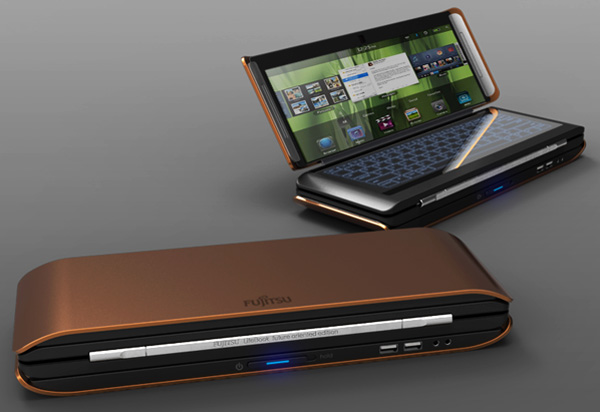 When you can’t decide if you want a tablet or a netbook, a slate or a notebook, you end up looking at devices that are supposed to perform both duties. You can look at something like the Eee Pad Transformer, but even that can be too bulky. So, we turn to the Fujitsu Lifebook X2 concept.

This design isn’t exactly sanctioned by Fujitsu itself, it came via Yanko Design contributor Park Hyin Jin. The idea is that it takes a notebook and completely folds it up. Open it once, and it’s almost like the old Nokia Communicator devices, except doing it with a touchscreen up top (otherwise it wouldn’t be a tablet) and a hardware (?) QWERTY keyboard down low.

Flip it open a couple more times and you get a notebook-sized device, once again with a touchscreen up top, but now you have a trackpad to join the QWERTY below. With all this folding, you get a lot of moving parts and, presumably, a seam across the upper screen. It’s probably quite thick too then.

It might be better going with something like the Acer Iconia instead, but the Lifebook X2 concept could prove to be interesting (and probably expensive) should it ever come to pass.