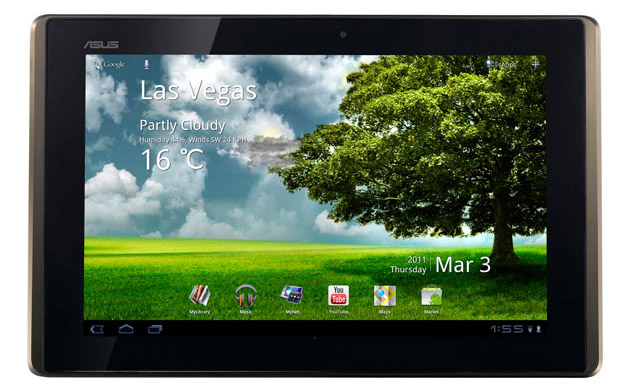 If you’re on the fence about going Android, still considering the iPad 2, but haven’t made a commitment just yet then maybe you should ponder things over for a little while longer.  The UK and Taiwan release of the ASUS Eee Pad Transformer were a success; it shortened supply (doesn’t this always happen) for the rest of the world.  Now with an end of April release, the $400 Android 3.0 (honeycomb) iPad challenger is set to make its debut to the US.

Packing 16GB, Wi-Fi with a 10.1-inch IPS LED back-lit capacitive multi-touch display, you’ll be happy to know SD-card, USB and HDMI ports were included in this tablet.  It will have plenty of power too, with the Nvidia Tegra 2 dual-core processor clocked at 1GHz and 1GB of RAM to top it all off.  The Galaxy Tab review we posted yesterday proves that Android needs plenty of giga-and-megahurtz to keep things running smooth.   The QWERTY chiclet keyboard launch date wasn’t announced yet, but we’re hoping for it to come out around the end of the month too.  You can pickup the EEE Pad Transformer from Best Buy nearing the end of April for $399.99 US.