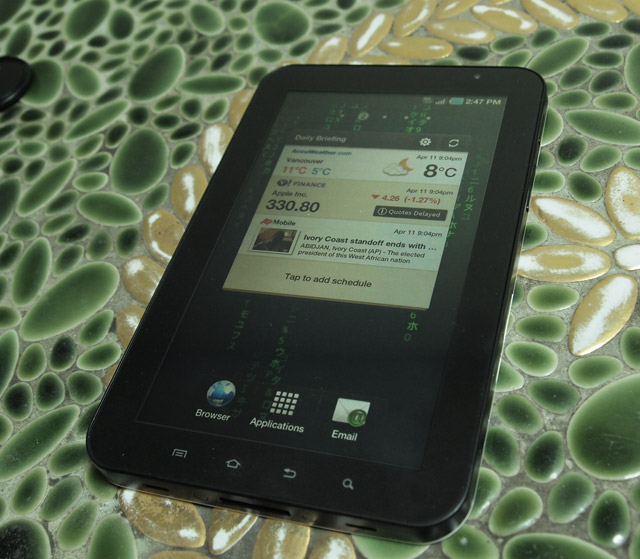 When the iPhone arrived on the scene it quickly rose to dominate the smartphone world. Then, Android came along and it has steadily increased its market share until it was king of the hill. In much the same way, the iPad is currently dominating the tablet world, but Android tablets are rising to the forefront too. The Samsung Galaxy Tab is a prime example of that.

The Samsung Galaxy S line of smartphones (along with its successors) has reached quite the audience and Samsung wants to do the same with its tablet. Is the Galaxy Tab up to the task? Let’s have a look.

The Galaxy Tab being featured in this review is the 3G model, very similar to the upcoming WiFi-only version, except of course this model uses the “Rocket Internet” from Rogers for up to 7.2Mbps 3.5G connectivity.

Running through the rest of the spec sheet we find Android 2.2 Froyo, a 7-inch 1024×600 WSVGA TFT touchscreen, integrated WiFi and GPS, 3.0MP rear camera, 1.3MP front camera, 16GB internal memory, microSD expansion, and your choice of either a black or white back.

The picture quality is about what you’d expect from a device like this, falling just short of par when compared to some of the more modern smartphones with their 5MP or even 8MP cameras. Resolution isn’t everything, of course, and the camera was able to reduce some noise under lower light conditions by smoothing the image; this results in a loss of detail, but a smoother photo overall. 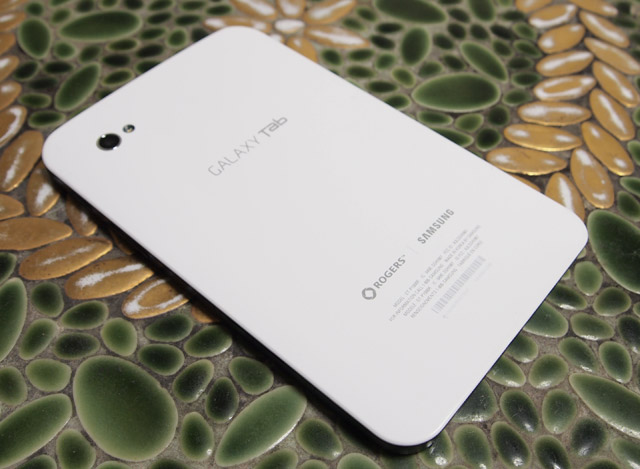 Just like the first generation iPad, the Samsung Galaxy Tab is a little thicker and heavier than you might expect. It measures 190.1 x 120.4 x 11.98mm and tips the scales at 375 grams. The thickness isn’t a big deal (thinner isn’t always better), but I would have liked it if the Galaxy Tab joined up with Jenny Craig for a little while.

Build quality is very solid, despite having “just” a plastic back. You never get the sense that this product is particularly fragile and I personally find the seven-inch size to be perfectly suitable for a tablet. In fact, I had no trouble fitting it into the side pocket in my cargo pants. It would have been nice if the bezel wasn’t quite so thick though; much like the Captivate. 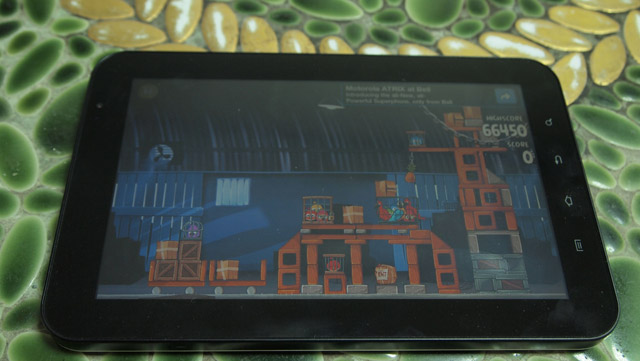 I wouldn’t say that Android 2.2 Froyo is bad. I wouldn’t even say that Samsung’s TouchWiz user interface is bad either. They both do the job just fine on smartphones, complete with live wallpapers, home screen widgets, and multiple home screens. The trouble is that Froyo is for phones, not tablets.

When you scroll your way around this tablet you really feel like you just got the Hummer of smartphones. It doesn’t feel particularly like a “tablet” experience as much as it does like a “big phone” experience. This is a common observation and it is certainly something worth thinking about.

Samsung thinks so too. That’s why the next Galaxy Tab will get Android 3.0 Honeycomb instead. That will be optimized for tablet use, making better use of the bigger screen.

The good thing about Android 2.2 and TouchWiz is that there is a built in task manager, this means no messing around with one of those third party “app killer” apps. And you need this task manager, because it seems like the Galaxy Tab can’t keep up under a heavier load.

Running one or two apps at a time (in true multitasking fashion) doesn’t seem to be too much trouble unless one of these requires a little more processing power. While playing Angry Birds Rio I experienced some significant lag and stuttering at times. I believe this might have been due to a couple of apps that were running in the background, and the issue is just exacerbated by Angry Birds stages that were a little more complex.

The touchscreen, while responsive, has two issues worth mentioning. First, it seems to be a really bad fingerprint magnet. An oleophobic coating would have been useful in this regard… or you can help it out by adding a screen protector. Second, there can be a fair bit of glare under certain lighting conditions, not only reducing your viewing angles but also making the display less than useful at times.

In general, day-to-day performance can hold up, so long as you are aware of these kinds of limitations. Outside of the more complex games, I rarely experienced much (noticeable) lag. Network speeds are respectable too. While I wasn’t able to achieve the theoretical maximum of 7.2Mbps, I was able to get 3.3Mbps down and 3.2Mbps up through the Rogers HSPA network in Vancouver.

Battery life is reasonably respectable for a tablet too. Depending on how you use it, you should be able to get a solid day or more on a single charge. Naturally, if you’re playing games for hours on end, that’ll cut your time short. They claim up to nine hours of battery for music playback, for instance.

The good news is that you can get the current Samsung Galaxy Tab for $200 on contract through Rogers. In the US, you have your choice at any of the carriers with packages starting at $200.  The bad news is the outright price is a cool $624.99, which is only $25 cheaper than the equivalent iPad 2 (16GB Wi-Fi + 3G). Bear in mind that the latter appears to offer better performance, more apps, and more of a “newness” factor.

The current Galaxy Tab isn’t a bad device by any stretch, but it could do a lot better. If you’re in the market for something like this and you can wait it out, I’d rather save a few hundred dollars and get the WiFi-only Galaxy Tab; or wait until the Honeycomb-loaded version hits the shelves. The “stuttering” performance at times and the non-tablet optimized UI hurt this product’s chances against the Cupertino juggernaut.

That said, I have faith that Android tablets will eventually usurp the iPad. It’ll just take time and the current Galaxy Tab isn’t the one that’s going to do it.