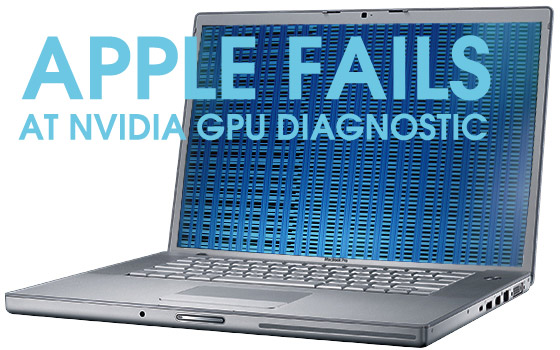 Apple hardware is known to be stable, reliable and expensive. Owners of Apple computers are ok with paying more, but that’s because they are getting the high-end goods with great customer service to back it up. But in early 2007 and 2008 things took a bit of a turn, at least they did in the view of a good number of MacBook Pro owners.

In July 2008 Nvidia admitted a high failure rate in some of their graphics processors due to a “packaging defect.” Hold up now, this reason is not explained in much detail beyond that. But many technicians are attributing this problem to improperly applied heat-transfer material (that silver gook that allows thermal energy to transfer from the chip to your heatsink and cooling fan.) The faulty Nvidia GeForce 8600M GT graphics processor was the GPU chip affected and the problems inevitably resulted in the loss of video or the inability to boot your MacBook Pro entirely. Again, they say a “packaging defect” was the problem. Would it be safe to say the MacBook Pro is the packaging? Nvidia was unavailable to comment on this “packaging problem” as they do not discuss agreements about their hardware partners.

So what did Apple do about this? After Nvidia took the fall they extended their service eligibility beyond the purchase date for two-years, then to three-years, and now four-years. This sounds amazing, but not really considering the PowerBook 5300s and the 190s from 1996 were covered for seven-years.

Apple’s Inability to Determine Eligibilty
Now on to the worst of the problems. Apple’s inability to properly diagnose computers with a GPU failure is a larger failure in itself. So how does it all go down?

One day you go to turn on your machine and nothing happens. Some of you are lucky and get a beep, others not; a total lifeless, bongless black screen of death. Sure, you hear those fans and drives whirling giving you a bit of hope, but no matter how long you wait that things not coming up. You then decide to call Apple support. You give them your serial number, they tell you that this computer is eligible for the extended service agreement, you say wow, you guys are the greatest, and you have a smile on your face once again.   They advise you to bring it on down to your local Apple store or authorized service center to be “evaluated.” Here’s where things get dirty.

The “test”
Apple has comprised a method of “evaluating” these systems that isn’t all that thorough. They hook up a USB stick with Nvidia’s diagnostic software, start up your MacBook Pro, it runs some tests and a report is printed out.  You are now set and your repair is covered.   Apple orders you a new logic board and swaps it out. Or not. When a GPU fails and over heats, when heat-transfer material is slopped on your motherboard oozing into parts that it shouldn’t be with that high-lead solder, you may have worse problems than a little software utility can pick up on.  That overheating GPU more than likely cooked itself and created a short in your logic board that wont allow it to boot at all.   This fact doesn’t matter to Apple, if they can’t do a diagnostic then it’s not a GPU failure (they say its the logic board), so in their eyes they are off the hook for the extended-service repair.

This leaves you at the mercy of an out of warranty repair. If you know much about Apple repair fees you’ll know how close you are to buying the latest model MacBook Pro for the price of repairing your old model. That “new logic board” that they say you need can cost over $1000. The infamous Apple logic board fail. What a cash grab this is, and here’s why.

The Call
I made the call to Apple after a friend of mine had his previously declined “eligible” extended-service covered MacBook Pro 17-inch repaired by a third-party service center. The problem was, you guessed it, a faulty GPU. For $260 USD including return shipping from NY to Canada they did a full diagnostics on the system, a 4 hour full load bench test for errors, replaced the nuked NVIDIA GPU with a new one, applied new heat-transfer material (properly), cleaned the heatsink, fan, and determined the logic board was fine despite Apple saying it was the problem, not the GPU. But Apple’s software couldn’t tell them it was the GPU, so Apple says it’s not the GPU, and the only way Apple will fix it is by replacing the logic board.

This all leads back to the bottom line. Money. A software diagnostic costs next to nothing to run. You bring your computer it in to an Apple store or authorized service center, they pop in a fancy USB stick and thats the holy grail to determining a GPU problem.  Now if it were to go beyond that, like how it should be diagnosed; by opening the computer, examining the components, testing which are faulty and which are not, then you would be using the time of a real technician and that costs much more to do.  Apple knows it, that’s why they hide behind their “policy.”

Isn’t it so simple for Apple? If their diagnostic utility won’t load and give a diagnostic report its not covered. Clear as day, in black and white; no diag, no report, no coverage. And this is very silly. How can you determine a nuked component on the mainboard of a computer by a software check in every instance? Sure, you may be able to pull it off from time to time if it didn’t experience a severe meltdown, but the majority of you are going to be swindled into thinking you need an entirely new logic board.

Technician Dave
After I made the rounds through various levels of support I managed to get a real hardware technician from Apple on the line. Lets call him Dave, for the sake of anonymity, he understood everything I was talking about and he even shared his thoughts and experiences he had with the GPU the problem. Dave told me he has been receiving feedback from many Apple service centers that they are finding more and more systems coming in that are not able to boot the diagnostic disc but have the same GPU failure. Wow I thought, do you really want to be telling me this Dave? He confirmed that the diagnostic utility is not always working and that many times a hardware tech will find this problem once they get in.  That is assuming they are looking for the problem.  Otherwise they just swap the entire logic board.  I thanked Dave for all the info and he connected me to customer service for the remainder of my request.

Its The Principal
I was trying to get Apple to pay for my friends repair bill. It wasn’t a whole lot of coin, $260 to repair a 17-inch MacBook Pro that was left behind as dead.  I also wanted to see their reaction to the news that their diagnostics did not work.  Not to mention its about the principal of the whole matter.  Apple, if an honest company, would address this once I brought the news to them that they had failed in their original evaluations.   And this is when I spoke to Mark. He was very polite, a veteran CSR that held his ground. Mark told me my friend would not be reimbursed. One of the reasons, although not admitted, was because it was not repaired at an Apple authorized service center. I believe if it was repaired at Apple’s own, they would have offered some sort of “credit” or compensation to my friend. This is because everyone up to Mark was asking all sorts of information about who repaired it, their name, location, website phone number.  I told them it all, it was Hi-Tech in NYC and I have a copy of the repair information I would be more than happy to fax over to them.  They did not want it.

I told Mark the reason why my friend didn’t take it to an Apple service center was because they wanted to replace the entire logic board and charge over $1000 when they could just repair the real problem, replace the defective GPU at a fraction of the cost. I further explained that since Apple proved negligent in diagnosing this common problem in his computer that was “eligible” for an out of warranty repair, my friend had no obligation to continue service and support through Apple.   Mark did not seem interested in this information, nor did he comment on the fact that the GPU was the failure and not diagnosed properly by Apple several months back. Mark finally apologized for our situation and said “if there is no diagnostic code, according to policy it is not eligible to be covered.”

I know Mark would have given my friend a nice iTunes gift card or some store credit if it was up to him, but it wasn’t. It’s Apple Policy. And Hi-Tech Electronics in NY continues to repair 10 MacBook Pros each week with the Nvidia GPU problem that more often than not should have been covered by Apple.

Editors Note: Names were changed in this article to protect the identity of the individuals.