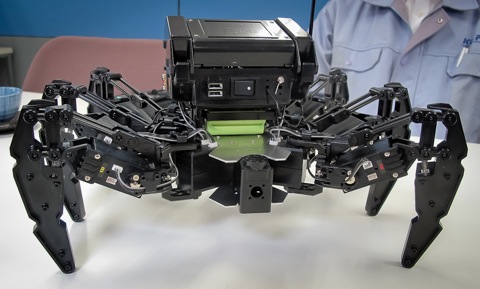 Robots are pretty awesome. As great as the humanoid bots may be, it’s even better when you get something like the Kondo Spider-Bot. It’s a robot that looks like a spider, complete with spider-like limbs that move the bot in a spider-like way. There’s just one problem: it only has six legs.

In this way, it’s not really fair to call this creation by Kondo a “spider” bot. From what I understand, it might be possible to add a couple legs to make the moniker a little more accurate, but there you have it. The other big thing with the Kondo Hexapod is that it’s supposed to be relatively inexpensive.

Each leg consists of two servos and they’re using spring-loaded movement for added efficiency. The Hexapod has a relatively short profile, letting it skitter about in very short passageways, but it can also lift itself up for better ground clearance. This way, it might be good for certain rescue operations, especially if you choose to mount a camera on the front. Power comes by way of a 10.8V 800mAh NiMH battery.

It’s not as epic as the ridable Mondo Spider, or the giant mechanical spiders by La Machine, but I imagine Kondo’s offering is a heck of a lot cheaper.