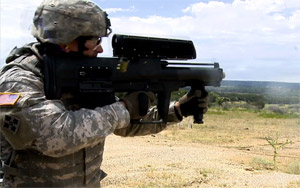 Smartphones are everywhere and smart TVs are quickly picking up in popularity too. The next logical step, then, is to create some smart guns. At least, that’s what PEO Soldier and ATK are thinking with the creation of the XM-25 computer smartgun.

They just received a $66 million contract to move into production. The gun isn’t just a gun; it comes loaded with a computer as part of its “counter defilade target engagement (CDTE) system.” What this means is that it can intelligently aim and track its targets. That’s for precision.

What I think is more interesting is the ability to detonate frag shells at different distances. See an enemy hiding behind cover? Get the frag to explode after the barricade rather than in front of it. This is a little Call of Duty, a little Medal of Honor, but there you have it. Also cool how the same gun can support multiple types of ammo.

All it needs now is the chainsaw a la Gears of War for some up close and personal action.