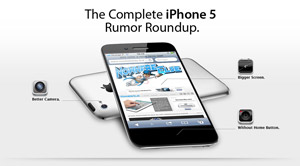 Every year around this time we get bombarded with a whole slew of rumors surrounding a new iPhone, and this year is no exception. You may have gotten lost in the sea of iPhone 5 rumors, so let’s boil them all done in one convenient location.

First, the physical design of the iPhone 5 will likely remain much the same as the iPhone 4. It might be a little slimmer on the sides and it’s possible the back is getting replaced with metal, but the overall design will remain largely the same. That means there’s likely no push for a physical keyboard. Ever.

That said, there are some big rumors that Apple is increasing the screen size to four-inches, putting the iPhone 5 right on par with the vast majority of Android smartphones. The increased size should still fit in the same kind of form factor as the iPhone 4, except the black bezel would be reduced. The bigger screen size could mean a better resolution too, but that’s not quite as clear.

We’ve also been hearing that the home button, as we know it, will be abandoned. You’ll still get “home button” functionality, but just not from a physical button where it is now. Instead, they could put a touch sensitive button (again, like Android) or it might be moved to the edges next, possibly below the volume buttons for example. I find this rumor unlikely, but you never know.

For a while, we thought the iPhone 5 would have the same 5MP OmniVision camera as its iPhone 4 predecessor, but Sony CEO Howard Stringer effectively let it leak that they’re supplying the camera for the iPhone 5. It’s not confirmed, of course, but we’re hearing that Sony is giving their “best” 8MP cam to the iPhone 5, which might even bump its video capabilities to 1080p HD.

Not surprisingly, the new iPhone 5 should support CDMA and it should be available in white too, but we’re also hearing that they might finally bump capacity to 64GB. Conversely, they might ditch much internal storage in place of a cloud-based solution to work with iTunes Cloud. Dual SIMs is very unlikely, but R-UIM MicroCard support is likely.

The iPhone 5 will most likely have the same (or similar) A5 processor as the iPad 2 and it should expect a boost in RAM, possibly to 1GB, along with HDMI-out support via an adapter. Whether there is 4G/LTE support remains to be seen.

Perhaps most importantly of all: the date. Given the delays for the Sony camera (due to the recent earthquake and tsunami in Japan), along with the too recent Verizon launch of the iPhone 4, the usual June-ish release of the iPhone could be ditched in favor of a September launch instead.

And there you have it. You are now caught up in iPhone 5 land… until another rumor rises to the surface.