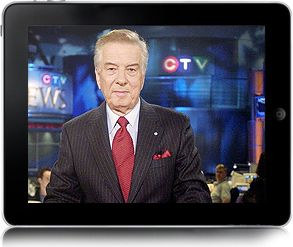 In case you haven’t joined the revolution already, you might want to know that you don’t have to sit in your living room to watch television. You don’t even need to be at a computer for an Internet stream. Bell would love it if you picked up a tablet and starting watching TV there (in addition to your home service, of course).

That’s because Bell Mobility has just expanded its enhanced Mobile TV service, bringing more content from its various Bell Media partners. This is for both live television, as well as on-demand video from the likes of CTV, TSN, Comedy Network, and so on.

There are at least four packages for you to consider on your Bell smartphone (Atrix!) or tablet. Bell Mobile TV sports costs $5 a month, which gives you 10 hours of video (including data charges). That tosses in expanded TSN, TSN2, and RDS live events, as well as a range of NHl content, Canadiens content, NFL games (though that lockout could mean you’re waiting more than a year for any new games), and even the Vancouver Whitecaps.

Other packages, all of which include 10 hours of watching, range from the $5 Bell Mobile TV Variety with CTV News and live MTV to the $5 Bell Mobile HBO with on-demand HBO. For a taste of everything, the $10 Bell Tablet TV is probably a decent fit.

This all sounds well and good until you consider than ten hours of streaming is barely more than three full hockey games. With the Stanley Cup playoffs right around the corner (Go Canucks Go!), you’d be advised to be careful of overages!