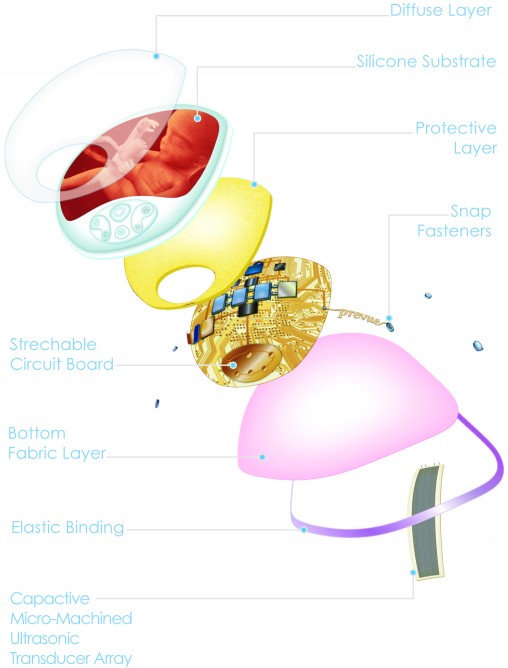 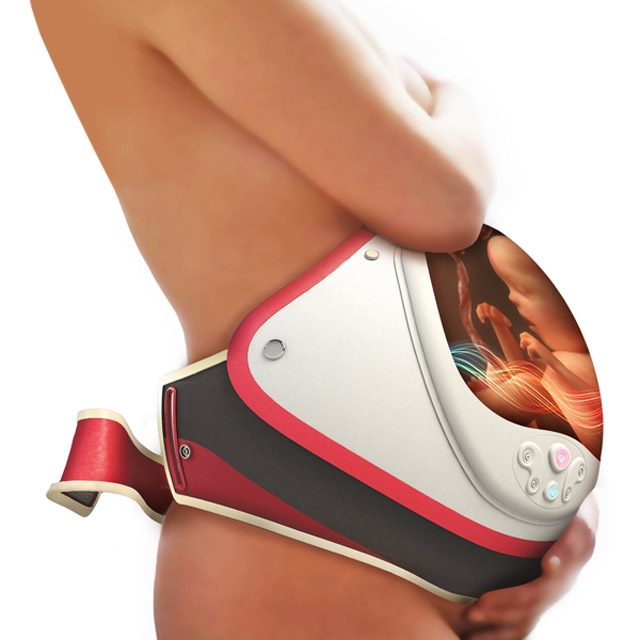 A new concept from Australian industrial designer Melody Shiue would bring the ultrasound into the home, with a wearable e-textile device called PreVue. The device gives 4D imaging of the fetus. Worn around the pregnant woman’s abdomen, it allows viewing of the fetus at anytime, day or night. The intent of the device is to enhance the bond between parents and the fetus.

Ultrasounds are not unusual for new mothers. They help confirm pregnancy, check on the baby if the mother experiences issues, and can detect potential health problems.

With recent advances in technology, parents are offered more detailed 3D images of the fetus. Three-dimensional scanning produces surface depth and volume. Now another dimension has been added – time. Real-time viewing capabilities have developed with 4D ultrasound techniques. It is possible to view live images of the fetus on a screen. PreVue would use upcoming e-textile technologies to incorporate the viewing screen and electronics into the device. The device is meant for bonding enhancement, not medical examination.

It might help bond the fetus and the mother, but is daily ultrasound use safe?

According to the Food and Drug Administration, ultrasound imaging has been used for over 20 years and has an excellent safety record. It is non-ionizing radiation so it doesn’t have the same risks as X-rays. However, the FDA cautions that ultrasound imaging can produce certain effects on the body that have an unknown risk. When an ultrasound is performed, it heats the tissues slightly. In some cases, it can also produce small pockets of gas in the tissue called cavitation. The long-term effects of tissue heating and cavitation are not known.

Because of these concerns, the FDA discourages the use of ultrasounds for non-medical purposes like fetal keepsake videos. In other words, mothers shouldn’t receive ultrasounds just to get an image of the fetus.

According to a report by the American Institute of Ultrasound in Medicine, the use of either 2D or 3D ultrasound to only view the fetus, obtain a picture, or determine the fetal sex without a medical reason is inappropriate and contrary to responsible medical practice.

If the device was brought to North America, wouldn’t it entail irresponsible use of a medical device meant to be used by a trained medical professional?

Irresponsible or not, it is doubtful the mother would wear it all day. It may simply satisfy the curiosity of parents who want to see exactly what the baby is doing when the mother feels activity.

Shiue recommends limitations for the device, like a fixed frequency (10 MHz), maximum scanning time (20 minutes every 24 hours), and countdown time would be apparent on screen with notifications.

PreVue has been entered into the 2011 Australian Design Award/James Dyson Award competition.