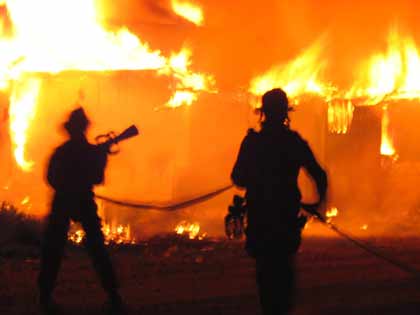 A group of researchers at Harvard University described the possibility of firefighters battling flames not with water, but with electricity. The researchers drew on earlier observations that electricity can control the shape of flames and applied it to quenching fires.

The researchers have found that applying large electric fields to fires helps extinguish the flames quickly. The phenomenon is possible because of carbon particles, or soot, generated in the flame. Soot particles are easily charged, and respond to the electric field and affect the stability of the fire.

Firefighters currently use water, foam, powder and other substances to put out fires. The technology could allow firefighters to douse flames from a distance, helping to avoid harm to firefighters and further damage to buildings. Using electricity would also cut back on water usage.

In the study, the researchers connected a electrical amplifier to a wand-like probe and used the device to shoot beams of electricity at an open flame that was more than a foot high. The flame was extinguished almost immediately. The results were replicated again and again.

The device consisted of a 600-watt amplifier, which is about the same power as a car stereo system. The researchers believe a power source with only a tenth of the wattage could yield similar results.

Potential applications of the technology include electrical sprinkler systems that would extinguish fires quickly and prevent water damage, and a portable fire flame-tamer that could be carried in a backpack and would target the fire with a handheld wand.

A drawback is that while the technology would excel at fighting fires in enclosed areas, like trucks, planes, submarines, and kitchen fires, the system wouldn’t work as well for large forest fires. Since they are spread over much larger areas, it would be difficult to target the entire area.

Since electrical waves can control the heat and distribution of flames, the researchers suggested that the technology could possibly improve the efficiency of technologies that involve controlled combustion, like car engines.