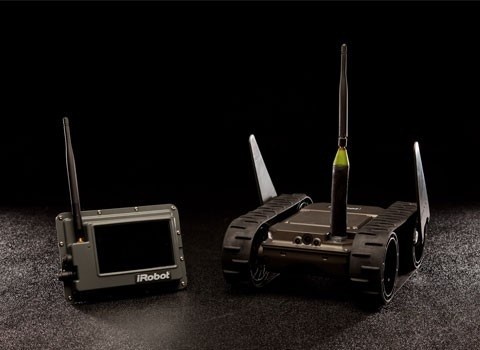 When I hear the name iRobot, the first thing that comes to mind is that silly Roomba. Yeah, it’s pretty clever how they can get a vacuum to roam around a room on its own, but the iRobot 110 FirstLook looks like it could be infinitely more useful.

A flattened remote control car with tank treads would be an accurate description, but this little robot can provide “hasty situational awareness” and perform “persistent observation.” It’s got a wireless camera on there (including IR for night vision) and, better still, it’s tough enough to survive fifteen foot drops onto concrete. That’s why they say it’s a “throwable” bot.

Those little treads sometimes aren’t enough, which is why they’ve included a couple of crutch-like legs that can reach out and push the iRobot over obstacles as high as 8 inches. That’s not a lot, but it’ll get over train tracks, up flights of stairs, and on top of other robots. Pretty neat.

In the wake of the Sendai earthquake (and the ensuing tsunami) in Japan, I can totally see how robots like these can be incredibly useful in search and rescue missions. That, or in Hollywood movies where they’re afraid of a bomb threat and need to sneak their way in to get a look. A first look, as it were.