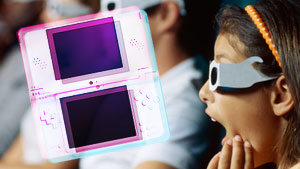 Let’s put this into perspective. Let’s say that you decide to buy one of the many Rock Band games for your Xbox 360, but you’re not at all interested in the plastic instruments. So, you figure out a way to play Rock Band using a regular Xbox 360 controller. What’s the point? By the same accord, let’s say that you can play Dance Central for Kinect by tapping the buttons on a Street Fighter arcade stick. Again, what’s the point?

And that’s kind of where we leave ourselves with today’s announcement from Nintendo. The 3DS is set to hit American shores this weekend, introducing glasses-free 3D to the portable gaming market. The trouble is that not everyone can see the 3D-ness, forcing them to put that slider all the way down to 2D for the games to make any sense.

So, what does Nintendo do? Hideki Konno, the Nintendo 3DS producer, says that they are “moving away from any stance that says if you don’t see the 3-D functionality, you can’t play the game.” What this means is that the 3D is even more of an aesthtetic gimmick, rather than an integral part of the game. You don’t need 3D to solve the in-game puzzles, because the games don’t rely on that perspective.

I guess this is both good and bad. In my brief experience with a 3DS demo, I started to suffer eye strain and a mild headache after only a few minutes of Pilotwings Resort. If I needed the 3D to be on all the time to play the game at all, I don’t think I could ever really play a 3DS… but that’s like buying the Wii just so you can play Mario Kart with a GameCube controller.