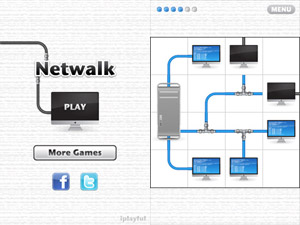 Have you ever wanted to live out the dream of being a network administrator for some nameless corporation? Okay, probably not, but you could still have some fun playing Netwalk for iPhone 1.0. You don’t have to deal with bureaucracy and TPS reports, but you do need to get a functional network going.

In a nutshell, it’s a casual puzzle game that you can get on your iPhone, iPod touch, or iPad. You get a series of tiles and the goal is to connect all the computers in the network to the main server. There are split cables that bend a certain way and you have to make sure that you leave no loose ends in the network either.

Yes, the actual gameplay — rotating tiles to fit the puzzle — isn’t exactly original, but it’s still worth its whopping price of free to download. There are twelve levels, three difficulty settings (corresponding to three sizes of game board, not unlike Minesweeper in Windows), and three “random” boards that can be generated at any time.