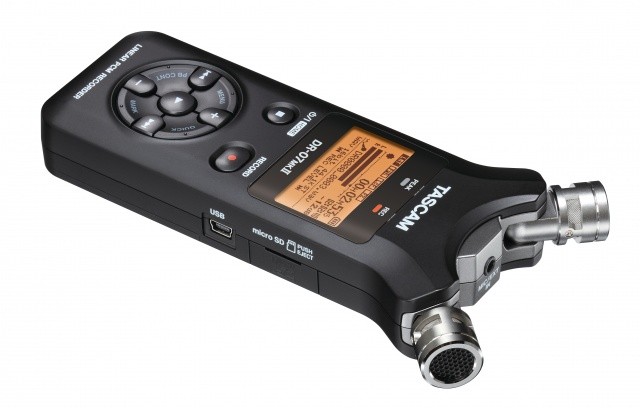 The DR-07 MkII uses two adjustable stereo condenser microphones to allow either XY or AB positioning, meaning the right stereo recording for the right circumstances. It may not mean much to some people, but those in positions such as journalists or musicians would quickly understand the versatility and options with a bit of experimenting.

But that’s not the only update Tascam’s thrown into the new model. They’ve also added Overdub and Reverb features, peak reduction, MicroSDHC slot and upped the battery life to 17.5 hours on two AA batteries.

The MkII offers Mp3 recording from 32 to 320kbps or WAV (BWF) linear PCM recording up to 96kHz/24-bit resolution.

Tascam will be releasing the recorder for March 31 at about $280, though the American Musical Supply site has them listed for pre-order at $150 with free shipping.

The stereo recorder features a pair of adjustable condenser microphones. The built-in mics can be moved from an XY position, for tight imaging, to an AB position, for a wider ambient sound.

The sound of the DR-07mkII reflects over 30 years of TASCAM’s recording experience. A dedicated power supply for the codec enables the full capabilities of the A/D and D/A converter, and separate analog & digital circuit boards and low impedance circuit design reduce noise in the design. The DR-05 records to microSD or microSDHC media, recording in MP3 or WAV (BWF) file format at up to 96kHz/24-bit resolution.

Sharing some features with the new DR-05, the DR-07mkII makes recording simple enough for any musician. The Peak reduction function sets the optimum recording level even in recording to avoid the over level. Quick Menu selects commonly used parameters in playback or record like auto level setting or limiting, while deeper settings are available through a full-featured setup menu. The 1/8” mic/line input can supply power for microphones. A Level Align function prevents uneven volume levels during playback through the 1/8” headphone output or built-in speaker. Variable-Speed Audition – which changes playback speed without affecting pitch – and looping are also available during playback for transcription or learning new music. 17.5 hours of longer battery life at 44.1kHz/16-bit, WAV (BWF) is long enough for any recording situation.

Some DR-07mkII features that aren’t found on the DR-05 include Overdub mode, which records over your previous take but keeps a copy of the original. The portable recorder also includes Auto Record and Auto Mark settings for hands-off operation. A reverb effect is also available to give your recordings a mastered polish.

For recording live music, band rehearsals, classes or simply sharing your music with the world, TASCAM’s DR-07mkII is an unbeatable value. 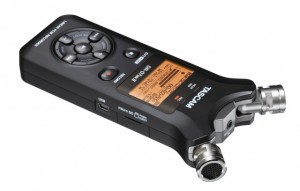