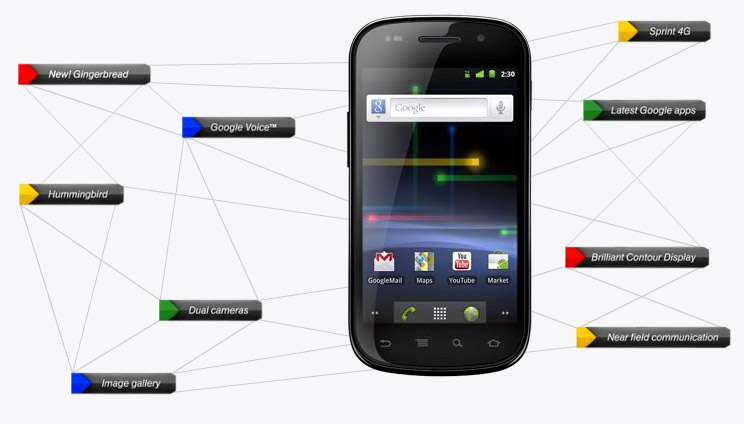 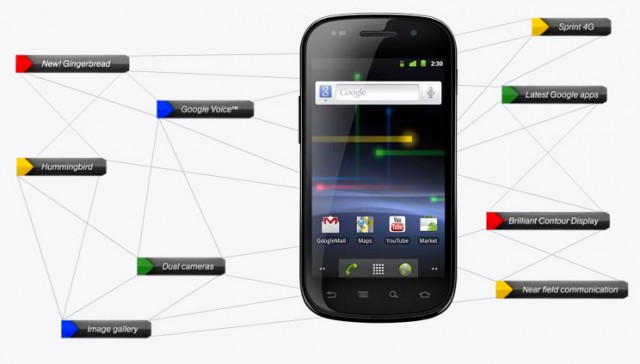 The official Google phone is now rocking some 4G connectivity… depending on your exact definition of what it means to have 4G. The Google Nexus S has been available since December of last year, but the American version only played friendly with T-Mobile’s bands. That’s changed, since Sprint has picked up its own version in the form of the Samsung Nexus S 4G.

Just like its T-Mobile compatible counterpart, the Sprint version has pretty much the same feature set. You still get Android 2.3 Gingerbread out of the box in a vanilla form; no TouchWiz or carrier-specific skinning here. You also get that four-inch Contour Display (Super AMOLED, none of that S-LCD stuff), as well as a 5MP rear camera, 1GHz processor, WiFi, Bluetooth 2.1+EDR, GPS, and NFC tech.

This is the fourth “4G” phone to launch through Sprint and the 20th 4G device overall in the carrier’s lineup. They’re going to have to bring in the heavy firepower now that T-Mobile and AT&T are combining into a Devastator-sized mega-provider. Then again, given the pending rise of dual core smartphones, is a 4G “vanilla Google” experience enough?

First Pure Google 4G Device with Android 2.3 in the U.S., Nexus S 4G from Google and Samsung, Coming to Sprint this Spring

OVERLAND PARK, Kan. (BUSINESS WIRE), March 21, 2011 – Sprint (NYSE: S) extends its 4G device innovation lead once again with the upcoming availability of the 20th 4G device and fourth 4G phone, Nexus S™ 4G1 from Google™. Coming to Sprint this spring, it will also be able to take advantage of the unprecedented controls and services enabled by Google Voice™ integration built into the Sprint Network.

“Nexus S 4G shows the strong commitment Sprint has to Android, and when combined with our 4G network capabilities, it gives customers the option of a pure Google experience,” said Fared Adib, vice president – Product Development, Sprint. “As the first 4G smartphone with Android 2.3, Nexus S 4G delivers on the promise of the advanced data capabilities of 4G to deliver an incredible Web browsing experience, offers quick and easy access to future Android updates and access to the services built into Google Voice.”

It is designed with Samsung’s brilliant Super AMOLED™ touchscreen technology providing a premium viewing experience. The 4-inch Contour Display features a curved design for a more comfortable look and feel in the user’s hand or along the side of the face. It also offers a screen that is bright with higher color contrast, meaning colors are incredibly vibrant and text is crisp at any size and produces less glare than on other smartphone displays when outdoors, so videos, pictures and games look their best and the sun won’t wash them out.

Sprint Nexus S 4G customers will be among the first to receive Android software upgrades and new Google mobile apps. In many cases, the device will get the updates and new apps as soon as they are available.

“We’re excited to partner with Sprint on Nexus S 4G, which brings innovative hardware by Samsung and innovations on the Android platform, to create a powerful smartphone experience,” said Andy Rubin, vice president of Engineering at Google.

Nexus S 4G features a 5 megapixel rear-facing camera and camcorder and front-facing VGA camera. In addition, Nexus S 4G features a gyroscope sensor to provide a smooth, fluid gaming experience when the user tilts the device up or down or pans the phone to the left or right.

Nexus S 4G from Google will be available exclusively from Sprint this spring for $199.99 with a new two-year service agreement or eligible upgrade (taxes not included) in all Sprint retail channels, including the Web (www.sprint.com) and Telesales (1-800-SPRINT1), as well as select national retailers.

Sprint Nexus S customers also will be able to easily use their current Sprint wireless phone number as their Google Voice number without having to port their number, avoiding porting charges and potential service disruptions. Google Voice makes it easy for people to manage and access most of their voice-based communication. It lets users manage up to six different phones through one number with intelligent call routing and advanced features like call screening, blocking and recording.

Now Sprint subscribers can use their Sprint number across their office, home and wireless phones, and personalize settings so calls from friends ring their wireless device and home phone, while calls from the boss only ring at the office. Google Voice users can receive transcribed voicemails and read or listen to them online. They can also read, send and search text messages and call logs online at www.google.com/voice.

Nexus S 4G requires activation on one of Sprint’s Everything Data plans, plus a required $10 Premium Data add-on charge for smartphones. Sprint’s Everything Data plan with Any Mobile, AnytimeSM includes unlimited Web, texting and calling to and from any mobile in America while on the Sprint Network, starting at just $69.99 per month plus required $10 Premium Data add-on charge – a savings of $39.99 per month versus Verizon’s comparable plan with unlimited talk, text and Web (excluding Verizon’s Southern California plan; pricing excludes surcharges and taxes).

Sprint customers get more with unlimited data plans on the Sprint Network. Sprint offers real simplicity, value and savings versus competitors, making it easy for customers to get the most out of their phones without using a calculator to tally up costs or worrying about how much data they’ve used.