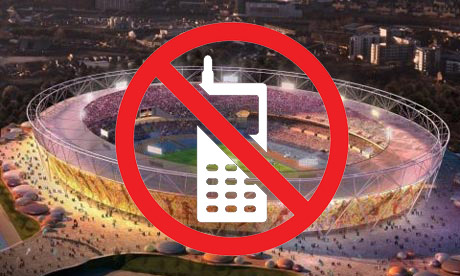 As the host of the Olympic Summer Games in 2012, London has been busy preparing security strategies for the games. For people who want to buy tickets, the London Organising Committee of the Olympic Games (LOCOG) has prepared a list of banned items for buyers.

The list of banned items includes not only firearms, ammunition, explosives and illegal drugs, but also liquids in containers of greater than 100ml in size, umbrellas, horns, whistles, drums, rattles, or any other devices that in the opinion of Locog may disturb a session. This includes mobile phones.

The more bizarre items on the list include umbrellas and large quantities of coins.

I get the ban on firearms, ammunition and explosives. But cellphones? For me, getting separated at a game in a giant stadium would be frightening. I don’t know how people went out before cellphones. My cellphone feels like an extension to my hand, and it brings a sense of comfort and security. I’m always connected and always in touch.

And umbrellas? I understand if your umbrella is one of those with the sharp point at the end of it – a jab in the butt would be pretty painful. Or you could lose an eye. But would someone really get kicked out for bringing a good old-fashioned umbrella with a rounded tip? Is it considered a potential weapon, with the ability to bludgeon everything in its path? Maybe I’m overreacting – it’s not like it ever rains in London. And the large quantities of coins? Could be I’m just naive. It’s true the bag of coins would hurt if someone swung them at you. Though it sounds more like a weapon used in a a mobster movie than a tennis match.  Perhaps there are coin shooting umbrellas we’re not aware of.

Food and drink are also banned, just like at the movie theatre where you’re not suppossed to bring your own Twizzlers because the theatre wants you to buy from them for three times the price. The difference is that at the movie theatre, there are no armed security guards making your stuff go through an airport-style X-ray.

LOCOG insisted that free water would be available to everyone, and that there are no plans to capitalize on thirsty Olympic spectators.

But Beijing didn’t ban cellphones. They did have a rule for transport of cellphones throughout the city for repair – the cellphone and battery had to arrive in separate packages.

No final decision has been made on the list of banned items for the 2012 games. There is a good chance a mobile phone ban would only be enforced in areas where silence is required during the event, like in gymnastics and archery. That’s understandable – a Lady Gaga ringtone would disturb anyone from concentration.

if the ban does carry out, umbrella-carrying Brits attached to their cellphones might want to skip the games, before they get shaken down for the sunscreen they snagged for their kids.