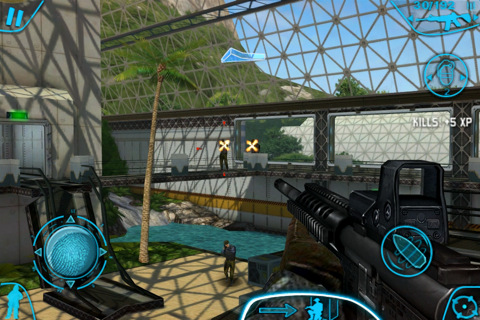 When Apple first announced the App Store many moons ago, I didn’t think that the iPhone was much of a threat to the Nintendo DS and Sony PSP. Based on more recent developments though, that opinion is changing. As is the case with the newly released Rainbow Six: Shadow Vanguard.

If you didn’t know any better, you’d swear that this was a game being released on the PSP. The graphics aren’t exactly PS3 or even NGP quality, but they’re a quantum leap from Bejeweled and Angry Birds. It plays not unlike the many other Rainbow Six games based on Tom Clancy’s universe, but that’s not necessarily a bad thing for fans of the series.

There are eleven missions in all, plus co-op and competitive mutiplayer. A picture is worth a thousand words, but the gameplay video is worth a lot more. Check it out below. Rainbow Six: Shadow Vanguard weighs in at 479MB and sells for $6.99.

So, where is the Android version?