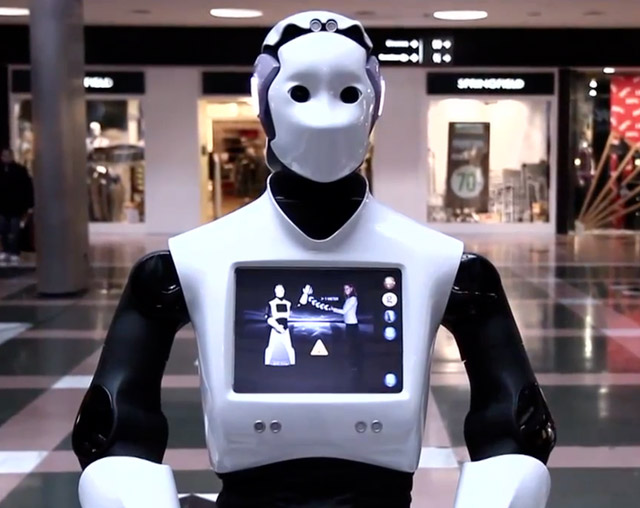 “A long time ago, in a galaxy far far away” really doesn’t seem all that far away anymore. If you’ve been itching to have your own personal R2-D2 or C-3PO, it looks Pal Robotics is getting us closer with the introduction of the REEM-H2 humanoid service robot.

Much like its Star Wars counterpart, REEM-H2 is able to speak a variety of languages and it’s there to help you with just about anything. The current application, for instance, is the shopping mall. REEM-H2 will literally walk you to the store you’re trying to find. It’ll also play videos and games for the kids, carry your bags (junk in the trunk), and allow you to make video calls allowing us to become even more lazy and dependent on technology.

It’s probably not appropriate to go around poking a human customer service agent in the mall, but REEM-H2 has no problem with that. It’s got stereoscopic vision, a series of on-board sensors, and voice recognition software. The crazy thing is that UAE has already ordered another twenty units to be placed in malls and public areas around Dubai.

This isn’t the future. It’s the (probably very expensive) present. Let’s just hope that they really do adhere to Asimov’s Three Laws of Robotics… and there’s no need for one to be sent from the future to save John Connor.

These are not the droids you are looking for…