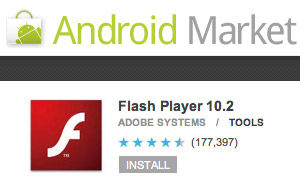 Just about every manufacturer came out with an Android device at CES, they would quickly point out that their product offering could support Flash 10.1. Naturally, this is a direct pot shot at Apple and it seems that Google is stepping up its flashiness once more with support for Flash 10.2.

That’s for a good number of you, anyway. If you happen to be rocking something with Android 2.2 Froyo, Android 2.3 Gingerbread, or Android 3.0 Honeycomb, you can go on over to Android Market and download Adobe Flash 10.2. Dual core smatphones get increased performance and the tablets are supposed to get better battery life as a result. Some reviews are coming in stating that 10.2 will “play videos smoother.”

While having two cores in your processor probably helps (though not always, as evidenced by the stellar performance of the mere 800MHz unit on the T-Mobile G2), a single core Android device should handle Flash 10.2 too… it just might not fare as well. Engadget found a 480p YouTube clip to be “fairly jerky” on the Droid 2, but it was “perfectly smooth” on the Xoom.

With hardware acceleration around the corner, dual core pads should even support 720p video playback at a “really smooth, enjoyable level.” Given these advances, would you choose a Xoom over an iPad? They do cost the same after all.