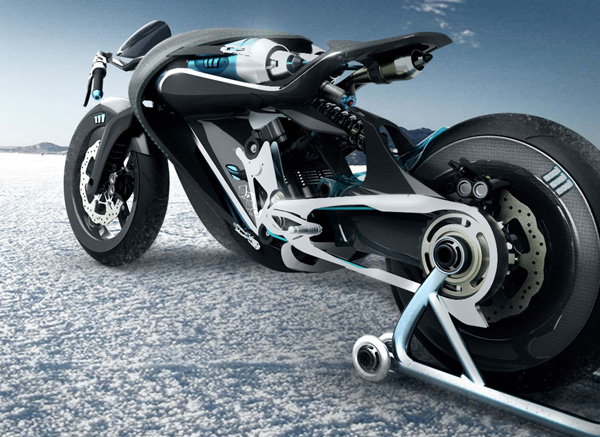 Think about what it means to be a green vehicle. These days, it’s typical to think of a biodiesel, a hybrid, or an electric car. Maybe you’re thinking of hydrogen fuel cells. However, none of those are likely as green as a bike that runs on, get this, compressed air.

I’d imagine there’s more to it than those canisters of compressed air that you use to dust your precious electronic components, but that sounds like the fundamental idea. Of course, just blowing air out the back isn’t going to provide much in propulsion, so the compressed air is being sent through two tanks to push the two-wheeler along.

This comes from a group of French designers: Charles-Edouard Berche, Ugo Spagnolo , Adrien Fuinesl, Frédéric Dobbelstein and Jean-Philippe Paries. The bike itself is kept like through mostly carbon fiber and, well, it looks pretty bad ass too. It’s a shame that we’re looking at just a rendering and the so-called Saline Bird motorcycle is little more than a concept.

The other green source of energy, I suppose, is manpower… but this looks like a lot more fun that pedaling away on a bicycle, don’t you think?