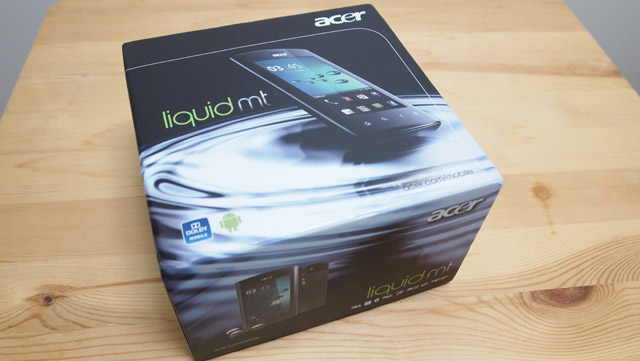 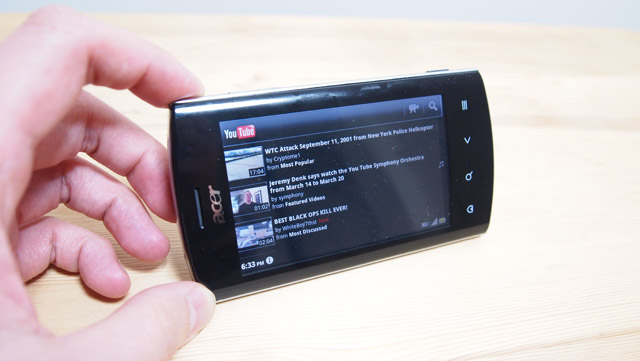 You have a lot of choices when it comes to Android smartphones. There are some very appealing devices from the likes of Motorola, HTC, and Samsung, for example. Over at Rogers Wireless, they’ve recently released the Acer Liquid MT. As you can imagine, this is the follow-up to the Acer Liquid E.

The newer model has pretty much the same form factor with rounded edges at the top and the bottom. As the name implies, they’ve also added in a significant dose of metal to replace the plastic of old. The four main Android “buttons” below the screen are capacitive and the touchscreen itself is marginally larger at 3.6 inches.

As a speedy rundown of what else you can expect, the Acer Liquid MT ships with Android 2.2 Froyo, does the HSPA 14.4Mbps thing, and has integrated WiFi-N and GPS. Other highlights include the 5.0 megapixel camera (no front camera), 512MB internal memory, microSD expansion, and the special Acer UI.

A clever inclusion is at the very top of the phone where you find the 3.5mm headphone jack. It may look like any other piece of chrome, but hidden beneath that are three little icons: battery, message, and missed call. This way, you can see if you need to respond to an email or plug into the wall without having to unlock the phone.

A Phone in the Hand Beats Two in the…

In terms of first impressions, the Acer Liquid MT is quite the hefty beast. By going with more of a metal finish and choice of materials, this smartphone is decidedly heavier than its plastic-clad counterparts. It just feels heavy and bulky in the hands, which isn’t helped by the sizable bezel around the sub-4.0 inch screen.

If you’ve ever held the BlackBerry Torch 9800 in your hands, then you’ll have a pretty good sense of how the Liquid MT feels. It’s heavy and it’s substantial, which may or may not be to your liking. I much preferred the thinner and lighter weight feel of the Samsung Galaxy S Captivate over this phone.

A Word on the Interface

I’ve had a shot at a few of the different manufacturer-specific skins for Android. HTC does the Sense thing, Motorola has MOTOBLUR, and so on. The Acer UI is no exception, but I’m not really sure it’s my cup of tea.

For instance, I’ve grown accustomed to holding down the “home” button in order to bring up some of my most recently used apps. That isn’t how this works. When you hold “home” on the Liquid MT, the Acer UI pops up with your missed calls, local weather and so on. Instead, you get back to the home screen, swipe to the side, and see the history of your activity. I suppose this achieves the same thing, but I prefer the “hold the home button” approach.

The app arrangement, on the other hand, is reasonable. You have two lines of four icons each that are “docked” to the bottom of the home screen. When you swipe up to see the rest of your apps, these eight icons remain “locked” at the top. The rest of your apps are then arranged on pages, not unlike iOS.

Even though it’s not quite a gigahertz processor, the 800MHz Scorpion processor and Adreno 205 GPU are able to hold their own for most of the daily activities that you’d have on this phone. Angry Birds was smooth, YouTube playback wasn’t a concern, and everything ran quite smoothly.

It’s not really enough to make this phone stand out from the rest of the Android-fueled crowd, but it’s holding its own too.

No one should really expect a camera phone to be as good as a real phone, but there are lots of smartphones that are really starting to challenge that assumption. The iPhone 4 is one example. The Nokia N8 is another. Unfortunately, the Acer Liquid MT does not fall into this realm.

As you can see from my sample photo, there is very significant noise throughout. You pick up on some details, to be sure, but that grainy noise just isn’t acceptable. Here is another sample. To make matters worse, the camera won’t even work if you don’t have a microSD card inserted. It comes with a 2GB card, but be prepared to buy your own higher capacity storage.

The Acer Liquid MT has some interesting things going for it. The curved screen is an interesting approach and I like the “hidden” notification lights at the top. Performance is reasonable and it’s among the cheaper Android smartphones when you buy into a contract with Rogers. Having Froyo out of the box isn’t bad either, considering that only the Nexus S is currently shipping with Gingerbread.

On the flip side, there are more than a few downsides to this phone. I’m not a fan of the extra weight and thickness, for instance, nor do I like the heavy noise exhibited by the 5.0-megapixel camera. This is going to be a personal preference thing, but I’ll still take HTC Sense UI (or vanilla Android) over the Acer UI. It’s also a pain that not only do you have to remove the battery cover, but the battery itself to replace the microSD card… which is necessary for taking photos.

It’s too bad that Rogers doesn’t have a newer HTC Android smartphone (yet), but you’re better off going with the Captivate from Samsung if that’s how you swing. This Acer just isn’t as good, but I guess that is reflected in its relatively lower price.