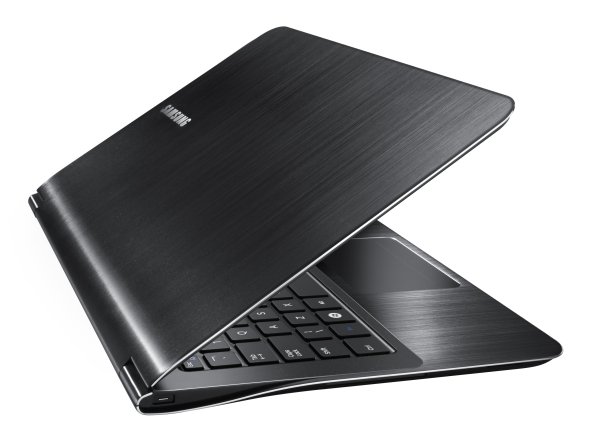 We first caught a glimpse of the decidedly thin and metallic Series 9 laptop from Samsung back at the Consumer Electronics Show in January. You could say it’s meant to combat the MacBook Air in the ultra-thin arena, but the brush aluminum finish makes it stand out from the crowd. And it might stand out from the shelf too, since it’s hitting retailers as of tomorrow.

As a quick refresher, the Samsung Series 9 has a 13.3-inch edge-to-edge display with a resolution of 1366×768 pixels. The base configuration lands you a 1.4GHz Core i5-2537M processor, 4GB RAM, 128GB SSD, and Windows 7 Home Premium. That’s priced at $1,649. You can spec it up from there for more money, like going to Windows 7 Professonal for an extra fifty bucks.

Not unlike the MacBook Air, the Series 9 will also be offered in an 11-inch version, but that’s not going to ship until next month. The basic configuration there calls for a 1.33GHz Core i3 380UM processor, 2GB RAM, and a 64GB SSD.

Seeing this notebook in person, I certainly appreciated its aesthetic and supermodel-like slimness, but I’m not sure I’d want to drop over $1,600 on a machine like this.