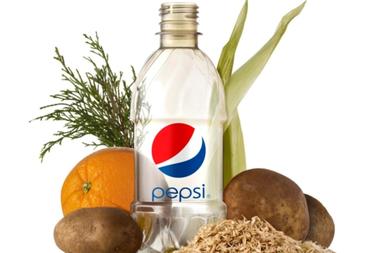 According to a recent announcement from Pepsi, the 100 per cent plant-based PET bottle has been achieved – they’ll be rolling out a test run of the new bottles in 2012.

The new plant bottles, made from switch grass, pine bark and corn husks, look “indistinguishable” from the old bottles, says PepsiCo senior vice pres of advanced research Rocco Papalia, and will eventually include leftover food materials such as orange peels, oat hulls and potato scraps from other companies under their corporate umbrella.

If the test run goes well, Pepsi says they’ll be switching to plant-based PET bottles for all of their products.

“This is the beginning of the end of petroleum-based plastics,” said Natural Resources Defense Council senior scientist Allen Hershkowitz.

It’s about time. Now if only they could switch to 100 per cent plant-based materials for the drinks themselves, we’d be set.