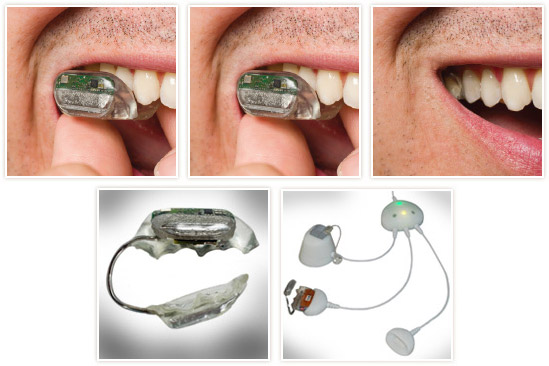 The idea of using bone conduction as a means of hearing for the deaf is nothing new. Beethoven was known to have cut the legs off of his piano and sitting naked on the floor while playing after he lost his hearing so the vibrations through his body would make up for the loss of hearing.

While that’s not exactly a societally acceptable option for most situations, another idea of his seems to have caught on. Around the turn of the 19th Century, he was also said to use a wooden rod with one end closed in the lid of his piano and the other clutched in his teeth to transfer the sound directly to his skull.

This same concept has been applied to Sonitus Medical’s SoundBite hearing aid, which has been approved for use in the U.S. and Europe with FDA and European CE Mark certification.

The SoundBite is custom-fitted to a user’s rear upper molars, where it uses bone conduction to transmit sounds through the teeth and skull to the bones in the inner ear. The SoundBite package includes a second piece, similar to a hearing aid, to wirelessly transmit data to the device on the tooth.

While it’s not for those who can get by with a hearing aid, the company says it does work to restore spatial hearing to those who are stone deaf in one ear.