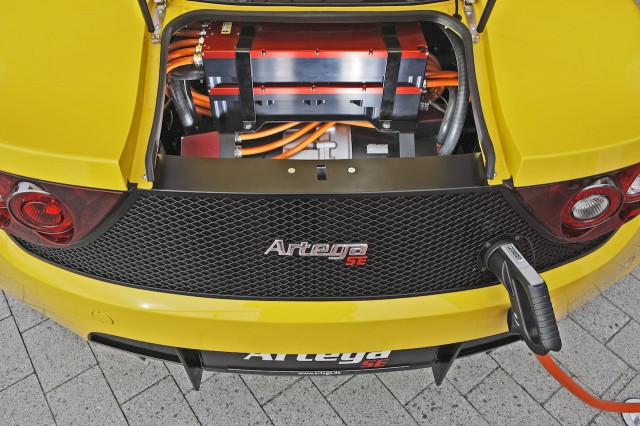 Most of us would generally agree that when it comes to fully electric vehicles, the Tesla Roadster (and its slight variations) is at the top of the heap. It looks like a real sports car but runs completely without the petrol. Well, Tesla will be getting a run for its money by way of the Artega SE.

Not only does it look kind of similar to the Tesla alternative, the Artega SE also happens to be a full electric vehicle. What’s more, the twin electric motors mounted over the rear axle are able to generate an impressive 380hp. By comparison, the Tesla Roadster only has 248hp (the Sport Model bumps this to 288hp).

That said, the Tesla is quicker to 60mph (3.9 seconds) than the Artega (4.3 seconds). It’s hard to say how fast the Tesla can go, since it’s electronically limited to 125mph, but the Artega SE can keep on revving until it hits 155mph. The 90 minute full charge time is pretty good too, giving you 124 miles of range.

With cars like the Tesla and Artega, the industry is finally starting to challenge the old mantra that electric cars have to slow and boring. They’re also showing us that they can be expensive: the Artega SE has its price starting at 150,000 Euro and they’re producing about 500 units a year.