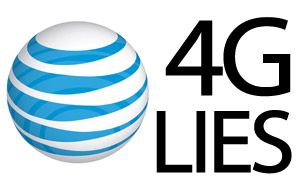 Since the International Telecommunications buckled under pressure from cell-phone companies and redefined their definition of 4G to include any technology faster than what they had in 2009, cellular providers across the U.S. have been taking advantage of pretty words and undeserved titles to class up what is in fact not 4G. And it’s not just one or two companies.

According to testing done by PC Mag, 4G on AT&T’s network is actually slower than their 3G – which in turn is faster than what MetroPCS LTE 4G, which is focussed on low cost rather than high speed. On the other hand, Verizon’s LTE is faster than the majority of in-home broadband connections.

T-Mobile has already admitted that two of their 4G phones, the myTouch 4G and T-Mobile G2, are not 4G at all.

AT&T also confessed to “crippling the upload speeds” of both the Motorola Atrix and HTC Inspire, according to PC Mag, although the cause or reason is still unknown.

The patchwork of technologies covered by the collective label of “4G” is making the term more or less meaningless. Though Verizon’s earned the title with their ultra-fast LTE, AT&T seems to be doing all it can to discredit the notion that the technology is superior to 3G.

It may be better off to wait until 5G to upgrade your phone. Or at least until there’s a more universal, results-based definition of 4G.

Until then, if your phone takes more than a couple of seconds to load the next Mobile Mag article, just remember that the signal from your cell phone is going to space and back. That fact in itself is deserving of a little patience – if not awe.