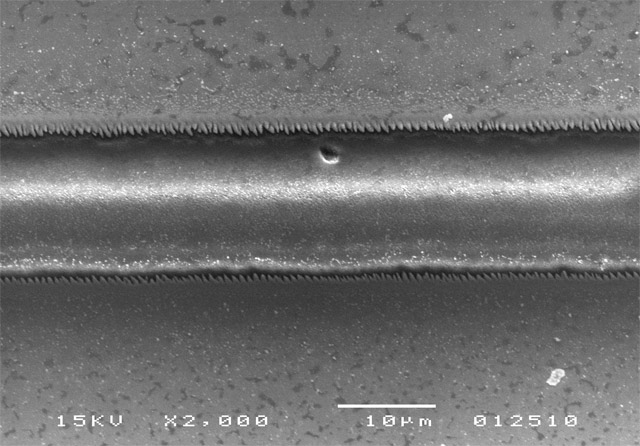 Researchers at Purdue University have successfully implemented their ultrafast laser scribing technique for thin-film solar cells, a promising innovation that may bring down production costs and boost efficiency of photovoltaics.

Solar panels have long been flat and solid, limiting their placement and usage over the years. But thin-film solar cells are rapidly gaining ground in the market, as the flexible cells can be used as rooftop shingles and tiles, building facades, or glazing on skylights.

The problem with thin film so far has been manufacturing costs and efficiency, both of which are the direct result of the “microchannels” in solar cells. The microchannels, which interconnect solar panels with one another to generate usable amounts of electricity, have traditionally been created using a mechanical stylus – a slow process that often creates imperfect, inefficient cells.

“Production costs of solar cells have been greatly reduced by making them out of thin films instead of wafers, but it is difficult to create high-quality microchannels in these thin films,” said Yung Shin, mechanical engineering professor and director of Purdue University’s Center for Laser-Based Manufacturing. “The mechanical scribing methods in commercial use do not create high-quality, well-defined channels. Although laser scribing has been studied extensively, until now we haven’t been able to precisely control lasers to accurately create the microchannels to the exacting specifications required.”

But the team’s ultrashort pulse laser and its “cold ablation” process has overcome that boundary. The laser uses pulses that only last a quadrillionth of a second, creating precise microchannels very quickly without causing enough heat to damage the film.

“It creates very clean microchannels on the surface of each layer,” said Shin. “You can do this at very high speed, meters per second, which is not possible with a mechanical scribe. This is very tricky because the laser must be precisely controlled so that it penetrates only one layer of the thin film at a time, and the layers are extremely thin. You can do that with this kind of laser because you have a very precise control of the depth, to about 10 to 20 nanometers.

“The efficiency of solar cells depends largely on how accurate your scribing of microchannels is,” added Shin. “If they are made as accurately as possibly, efficiency goes up.”

Thin-film solar cells account for about 20 per cent of watts generated in the photovoltaic market globally, and are expected to account for 31 per cent by 2013. Though, that number may rise quickly once the pulse-laser technique is refined and commercialized over the course of their study.

Their work is being funded by a three-year $425,000 grant from the National Science Foundation.