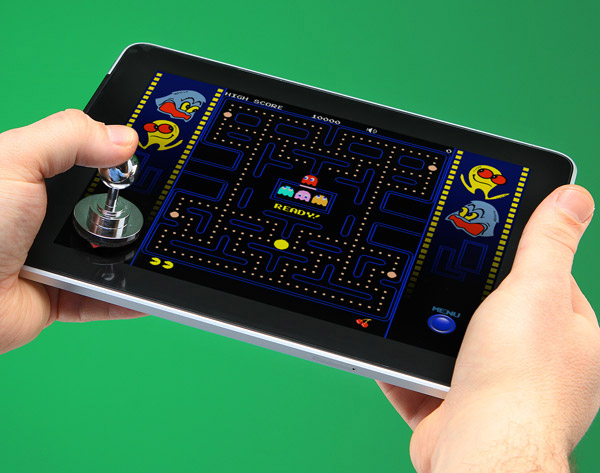 One gaming innovation that came out of CES this past January was the JoyStick-IT arcade style iPad gaming joystick. We were more than enthusiastic about its release, but  I spent some good time with the $25 device and you will be surprised to know that it just didn’t stick with me. I’m not a serious gamer by any means, but what I can tell you is if you are a serious gamer and you get excited when playing your favorite games — even the least bit — this device may not be for you.

The Joystick-it is milled from solid aluminum, a suction cup sandwiches a conductive layer of metal mesh that sits atop sponge which in turn rests upon your touchscreen display to create conductivity. It works similar to the technology in those gloves you can use on your touchscreen in the winter.

I use a protective layer of film on my iPad. I dont know if you do or not, but I get am pretty clumsy and like to protect touchscreen glass as soon as it comes in. If you don’t, then this feedback may not apply to you, as the JOYSTICK-IT works about as well as you could expect it to while being stuck to pure glass. But not so fast, you may have to worry about another thing. The sponge falls short. The edge of aluminum touches down on your screen when you toggle in different directions. While it provides an adequate amount of cushioning for movement feedback, it doesn’t cover the entire area when you touch it down on the glass.

I dont know how easy it is to scratch the iPads display since I use a protective film to prevent scratches. The protective film remained relatively unscathed. So those who go naked could be the better judge of that. But with the sponge layer sitting on top of your iPad even a 10th or 100th of a milimeter, it could scratch. This did not scratch my protective film, but then again, I couldn’t really get it to stay on very well either. With my anti-scratch layer of Zaggness I found it less than optimal. The display was clean, the suction cup clean, maybe it’s something to do with the protective film but the suction cup easily popped off when taking quick turns avoiding ghosts in PAC MAN. Sure, you could play much more gentle and just lightly toggle up and down and keep your enthusiasm to a minimum, but I like to get excited, make quick moves and shift around. If you get excited or move your body in the least bit while playing, if you become a bit animated in your movements, or, if you are under the age of 15 you’re going to have a hell of a time keeping this stuck. Picture Mr. Dressup playing the iPad, this is how excited you can be. (Not mocking Mr. Dressup, he rules).

It’s a decent first generation accessory trying to fill a void in the touchscreen tablet gaming market. I think the idea is there but it needs a bit more “stick” to give it more “joy.” If your tablet glass is naked you should be able to have a moderate amount of fun with it. But remember, Mr. Dressup.