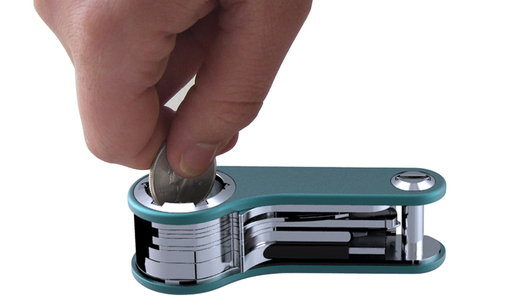 Have you ever picked up one of those Swiss Army Knife deals, only to learn that it’s missing a tool that you really want to use. Doesn’t it always end up having an extra tool or two that you’re never going to need? The Quirky Switch Pocketknife willto fix that.

It’s a modular pocket knife that you effectively put together yourself. You open up the giant case that comes filled with no fewer than 18 different tool attachments and then you choose which ones you want to include and which ones you don’t.

The kit includes everything you need to build your custom tool, including:

There are two exterior body covers, two slotted caps, and three interior axle assemblies. The smallest axle can hold between 2 and 6 ools, the medium holds four to ten, and the large holds 7 to 13. It’s up to you how big you want to go and, since it’s modular, you can always change it in the future.

It’s a nifty idea, but I’m not sure how useful it’ll be after you’ve set it up the first time. The $79 asking price might be a bit much too, but it really depends on the quality of the tools.