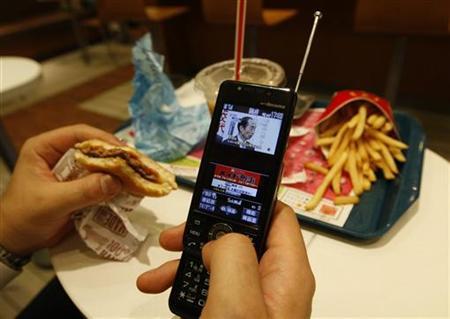 Watching TV is becoming a more social endeavour amongst British youth, according to a recent study by media consulting company Digital Clarity. Of 1,300 British mobile internet users below 25 years of age, eight of 10 responded that they use mobile devices to talk to friends about the show they’re watching.

Using Facebook, Twitter and other apps to chat with friends and give real-time accounts of what they’re watching, the trend was previously noted in the U.S. at 86 per cent of those under 25 doing the same.

In the U.S., this has sparked a new trend of “second screening,” where old movies and shows are run on TV with live commentary via social media. For example, HBO’s screening of 14-year-old movie Private Parts with commentary by Howard Stern, which garnered far higher ratings than the average rerun.

And while the trend is catching on in Britain, there’s still a question of how to profit off of the trend.

“Up until 12 months ago, TV was struggling to reach the younger market as more and more channels were becoming available,” Digital Clarity founder Reggie James said in an interview with Reuters. “Social TV has changed this completely by turning programs into online events where you have to watch them as they happen.

“The audience have already taken their seats and are ready to join the conversation,” James said. “It’s now up to the TV companies to tap into this huge and lucrative market.”

Reuters reports television networks are using this as a new marketplace to pitch to advertisers.