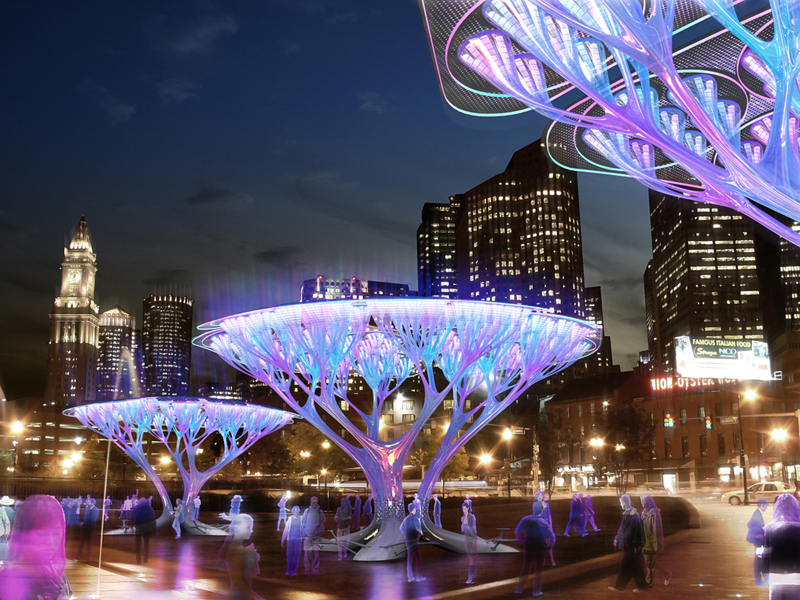 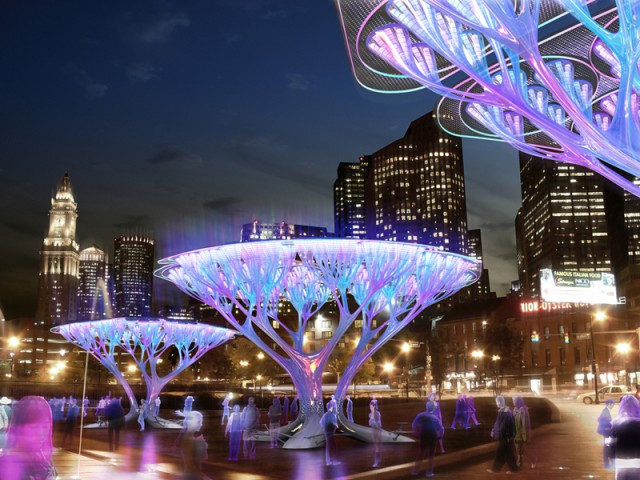 Blight on the landscape, or awesome improvement on mother nature?

Influx Studio has designed synthetic trees that are capable of removing carbon dioxide from the air and releasing oxygen. Mario Caceres and Christian Canonico of Influx Studio envision the trees in urban landscapes all over Boston, helping clean the air “branch” by branch.

The treepods will work by utilizing an eco-friendly, alkaline resin which reacts with the air around it and strips the air of carbon dioxide. The clean air will float away happily. The treepods will be made entirely of recycled plastic from drink bottles.

As part of the design, the trees are attached to each other to form clumps, or treepods, which the team hopes will encourage people to gather under them and help power the trees. To maximize the tree’s efficiency, the treepods will partly power themselves with the solar energy they generate through panels on top of the trees. The team found that solar power on its own wasn’t enough to power the trees, so the trees would be placed in pods and joined together by see-saws and hammocks.

Some might ask, what’s wrong with normal trees? They are nature’s lungs, aren’t they? Well, treepods don’t require soil or water and can be placed in areas that don’t support tree growth, like in heavily-polluted cities plagued by smog.

Influx Studio was inspired by Dr Klaus Lackner, the Director of the Lenfest Center for Sustainable Energy at Columbia University. He in turn was inspired by his daughter’s 8th grade science fair project that extracted CO2 from the air by using a fish tank pump and a battery.

Whether you think the trees are awesome or an eye-sore, they have the potential to help clean up the air in polluted city centres.There has been no word on whether the treepods will actually make their way to Boston.