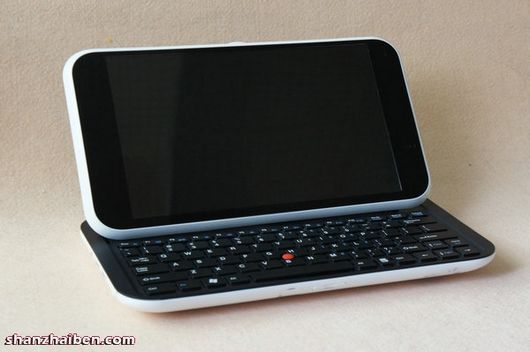 Why knock off just one product when you can Frankenstein them all together to make for a mega product? That seems to be the idea behind this nameless contraption from China, but the net result actually looks pretty darn promising.

Let’s start with the iPhone 3GS. This version doesn’t have the home button (as rumored for the iPhone 5), but it has a similar black frame surrounded by a light-colored bezel. However, instead of a 3.5-inch Retina Display, it has a 10-inch 1026×600 screen. But wait. There’s more.

Then, you get the slide-out and tilt keyboard. This kind of tablet form factor is not unlike the Eee Pad Slider or the Samsung Sliding PC 7 Series, but the propping mechanism on the back looks like it’s borrowing a page out of the Nokia N97 mini. And what’s this I see in the middle of a QWERTY keyboard? Could it be the iconic red IBM/Lenovo ThinkPad TrackPoint nubby cap thing for a mouse pointer?

We don’t get to see this thing turned on, but it is running on a 1.66GHz Intel Atom N455 processor. So, I’m assuming it’s some build of Windows, but I can’t say for sure. Other specs include 1GB RAM, 160GB hard drive, and a 3700mAh lithium-ion battery. It ain’t branded, but the sellers are aiming at just a $250 price point. Cheap knockoffs have to stay cheap, right?