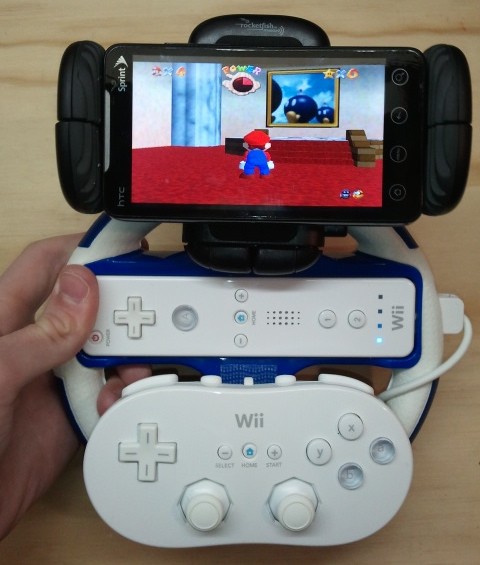 We play a heck of a lot more games on our smartphones these days, but those touchscreen controls can leave something to be desired. We’ve seen all sorts of contraptions to overcome that less than ideal interface, but none are quite as awe-inspiring as the EVOtainiment System.

Devised by some innovative developer named Jack Malone, it takes the HTC EVO 4G from Sprint and combines with some Nintendo-flavored love. The Wii Wheel (Nerf version) holds it altogether, containing the Wii Remote in the middle and, with some fashioning out by Malone, a Classic Controller toward the bottom. The EVO itself is held in place with a generic GPS mount.

Now that you’ve got N64oid to emulate the Nintendo 64 on your Android device, you can concoct your own take on the EVOtainment System for some Super Mario 64 on the go. It’s portable, but I wouldn’t exactly say it’s pocketable.

Or, you know, you could just buy the new Nintendo 3DS for a fraction of the price and still be on the cutting edge of mobile gaming. Just a thought. I’m sure there’ll be emulators on that too, just like the homebrew stuff that showed up on the DS, DS Lite, and DSi.