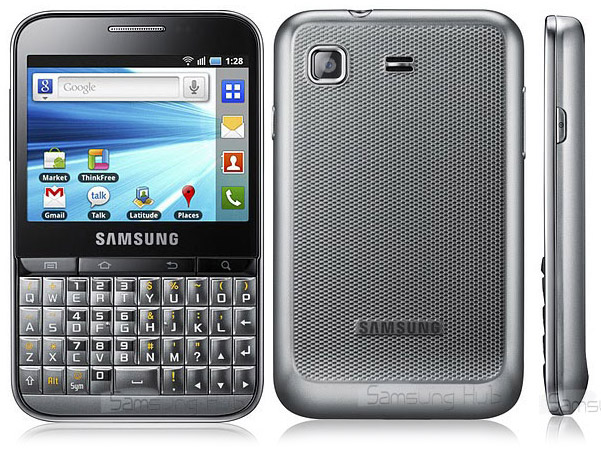 No, the aesthetic isn’t quite the same, but it’s obvious enough that the Samsung Galaxy Pro is very much following in the same footsteps as the Motorola Droid Pro that came out oh so long ago. It’s an Android smartphone in bar form with a physical QWERTY keyboard and a small touchscreen display.

The good news is that this kind of smartphone might be more suitable for people coming from devices like the Nokia E71 or BlackBerry Curve. The bad news is that the specs leave quite a bit to be desired. The 2.8-inch display merely boasts a QVGA (320×240) resolution. The camera? Yeah, it’s only a three-megapixel shooter.

What about the real guts of the machine? Well, it’s rocking an unspecified 800MHz processor, which should theoretically put it on par with something like the HTC Desire Z. Rounding out the specs are Android 2.2 Froyo, dual-band HSDPA 7.2Mbps, Social Hub, Samsung TouchWiz, and aGPS. You’ll need to rely on a microSD card too, since there’s only 2 gigs on board for storage.

It’s been more or less confirmed that Three UK (3 UK) will be picking up the Samsung Galaxy Pro, but they have not yet indicated price. For their sake, I hope it’s dirt cheap. Otherwise, the appeal of a physical keyboard isn’t exactly enough of a draw for a phone like this.