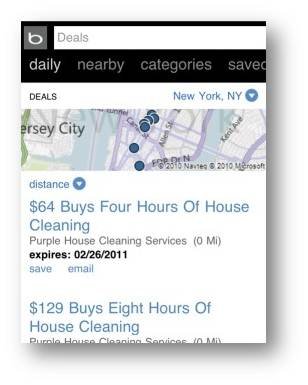 Google tried to buy Groupon and that didn’t go so well. So Microsoft is taking an entirely different approach with its new Bing Deals platform: it’s not really offering any deals at all. Instead, Bing Deals will operate more like a “daily deals” aggregator, not unlike what you might already get through a site like DealRadar. Microsoft has partnered with The Dealmap to launch Bing Deals, assembling offers from Groupon, Living Social, Restaurant.com, and other related sites.

Interestingly enough, the mobile version of Bing Deals isn’t exactly being optimized for Windows Phone 7. Instead, they’re catering to iPhone and Android with m.bing.com; maybe there’s a WP7 app for that instead. They say you need an HTML5 optimized device.

I don’t see how Bing Deals is all that different from all the other daily deal aggregators out there (hello referral income), but I guess you could say that it sorta beat Google to the punch?