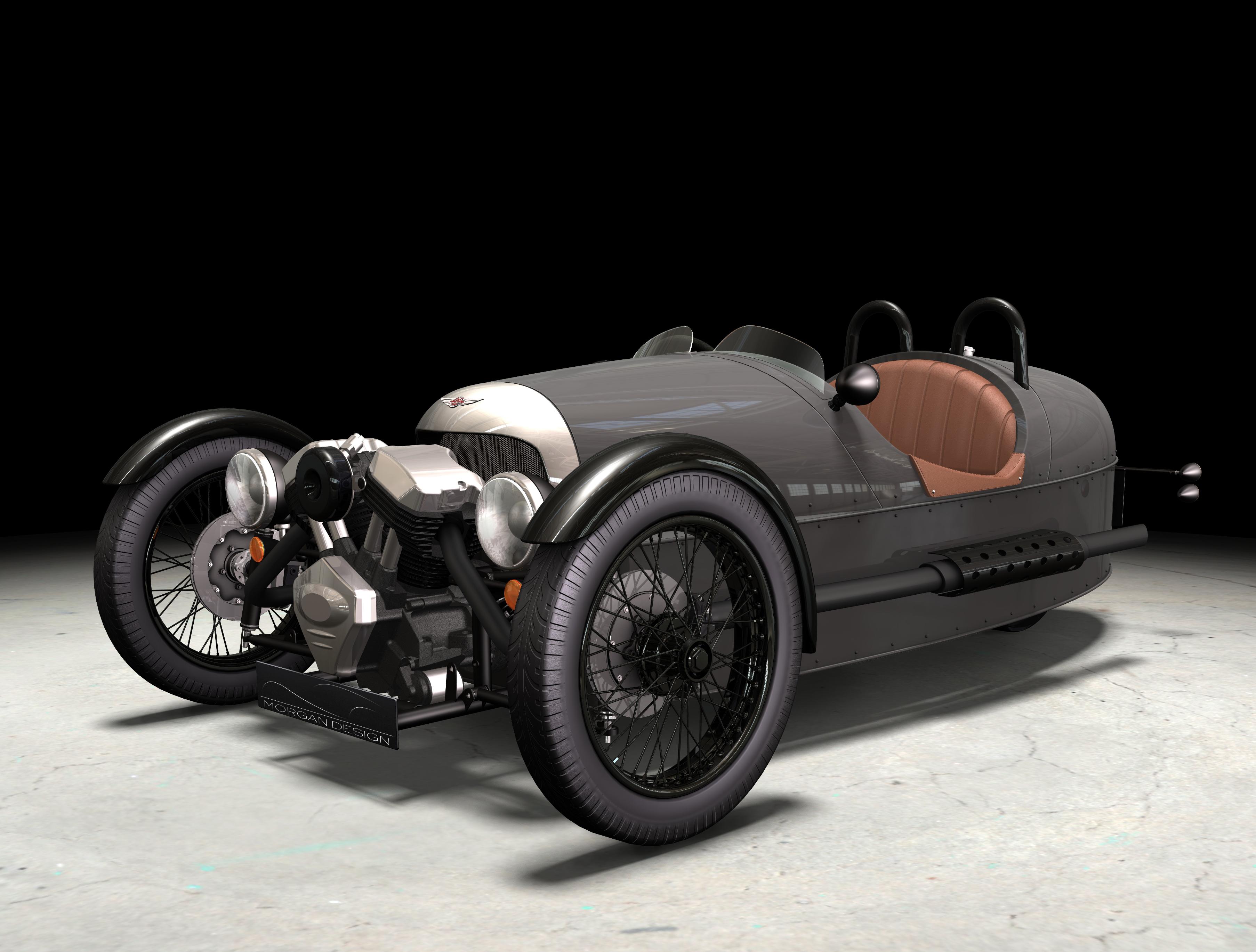 If you’re thinking that the three-wheeler thing has been done before, you’d be right. I remember seeing the T-Rex a few years back, or the most recent Manta concept, for example, as well as several other cars that put two wheels in the back and a driving wheel in the back. The Morgan 3 Wheeler continues that tradition, but it’s no copycat.

Morgan was apparently doing the three-wheeling thing before three-wheeling was cool. You could say that Morgan is a hipster of sorts, perhaps without the skinny jeans and indie music as it is a British operation. Perhaps you need a racing jacket, a giant mustache, a pair of goggles, and some scarf flowing in the wind instead.

They’re saying that they’ve designed the new Morgan 3 Wheeler, which made its debut in Geneva this week, with one purpose in mind: to make driving fun. Sure, the 1.9L V-twin engine is only good for 115hp and it uses a commuter-friendly Madza 5-speed transmission, but that retro British motorway appeal is undeniable, even if it’s not the fastest thing in the world.

I’d be a little concerned about the exposed engine and I’m not entirely sure how street legal such a vehicle would be, but it does look like it’d be fun to take it for a spin from Nottinghamshire to Southampton. The 3 Wheeler is being listed at 25,000 GBP before the government gets its cut.

When did you last regard a journey by motor car as an adventure? The Morgan 3 Wheeler is launched to bring the fun and passion back to personal transport. Lift the safety catch from the “bomb release” starter, hear the massive twin cylinders detonate and choose your favourite destination.

The iconic design of the Morgan Threewheeler has been updated with 21st Century technology. The powertrain is a V Twin fuel injected engine mated to a Mazda 5 speed (and reverse) gearbox. This provides smooth “get in and drive” convenience with the thrill of extreme performance. The car is a fusion of old and new.

Safety is paramount with a reinforced tubular chassis and twin rollbars for driver and passenger. A sturdy V belt provides traction to the reinforced rear tyre.

Some things have not changed. The Morgan Threewheeler still holds long distance speed records for one litre cars set in the 1930’s so why change the shape? The pronounced bullet shape and the exposed chassis and aluminium tub are accompanied by the aeroplane profile of the car’s sides. The shape is of a gentle yet powerful missile at the front leading to a beetle back tail at the rear.

From the design viewpoint, the focus was set on making the car as close to an aeroplane as possible, while retaining handy extra space for driver, passenger and a holdall in the rear. But above all the Morgan 3 Wheeler is designed for one purpose alone, to make driving fun. A leather padded cockpit complete with aircraft instrumentation adds to the sense of flying on the road. The car is easy to control with compact dimensions offering a perfect view ahead and to the rear. The car seems to respond as much to thought as physical input.

Dynamism is further enhanced by what the Morgan design team calls a sporty “race on Sunday” design philosophy. The car’s lines do not end abruptly but instead flow organically and echo the smooth shapes of a racetrack. The smooth profile makes the car look sleeker and lower. The sculpted bonnet and boot enhance the aerodynamic feel and the short overhangs front and rear emphasize the sports car sense of purpose.

Morgan chassis experts have worked on the driving experience of the new Morgan 3 Wheeler with the same passion given to the development of any new Morgan. The result is a driver’s car with properties that do the sporting appearance full justice. The weight of the engine is counterbalanced by the mass of the passengers and the car has a planted feel with a very low centre of gravity to ensure it remains glued to the road.

During the development process, the chassis team worked on the new 3 Wheeler in parallel with the forthcoming Morgan EvaGT. The result is a solution that features changes and refinements to virtually every single detail that affects a car’s cornering capabilities.

During its first year of production, the new Morgan 3 Wheeler will be available with a V twin from specialist engine builder S & S. The car is approved by US and European road transport authorities for safety and emissions. With an economical 1 15 horsepower the motor provides maximum power at minimum revs. Big torque spells effortless hillclimbing ability. The current focus of the Morgan Motor Company to cut CO2 emissions and low fuel consumption is very much part of the rationale behind the launch of this car. The time is right for Morgan to take a new look at the combination of acceleration, on road performance and economy. The time is right for Morgan to relaunch the 3 Wheeler.

Bespoke leather and paint are available at extra cost as on the classic Morgan. A Polished engine, stainless steel tailpipes, cowl, polished cowl,headlamps and roll hoops are also extra cost options for a more classic look.
Exciting graphic packs to compliment the Sport “race on Sunday” philosophy
High quality decals are available to give the owner the opportunity to boost the sporty attitude of the new Morgan 3 Wheeler. These include special designs including US military and British Air
Force inspired logos, oval racing numbers and stripes, a fearsome shark nose, chequered winner’s bonnet, official national flags and the Morgan wings.