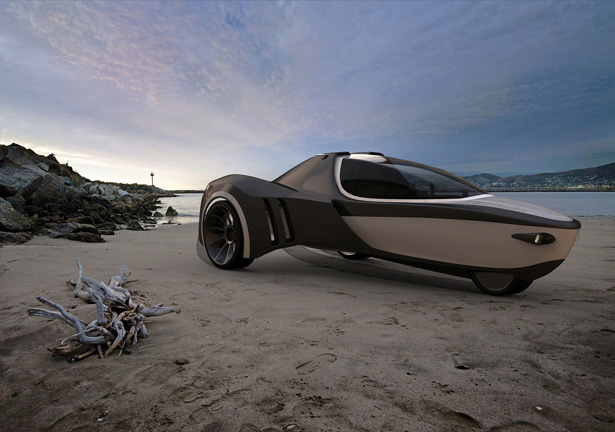 The Manta is part motorcycle, part Sea-Doo and part…that three-wheeled van that kept tipping over on Mr. Bean shows. It’s like a Campagna T-rex driving in reverse from the park, down the beach and into the waves. And it almost looks like something you would see on a James Bond movie.

It’s the Manta, a three-wheeled amphibious electric concept car by David Cardoso Loureiro of Belgium which was entered into the Michelin Challenge Design and won a spot on display at the North American International Auto Show.

On land, the Manta moves more or less the way you would expect it to: Like an enclosed trike motorcycle. The two rear wheels feature in-wheel electric motors, though the designer doesn’t seem to have released any specs.

In water is where the Manta’s innovation really shines through. The rear wheels pivot 90º for the hubs to double as propellers, using the individual wheel motors to control direction rather than having a rudder.

There’s been no word on whether or not this concept is going to see production. I doubt it.

But I sure hope it does.