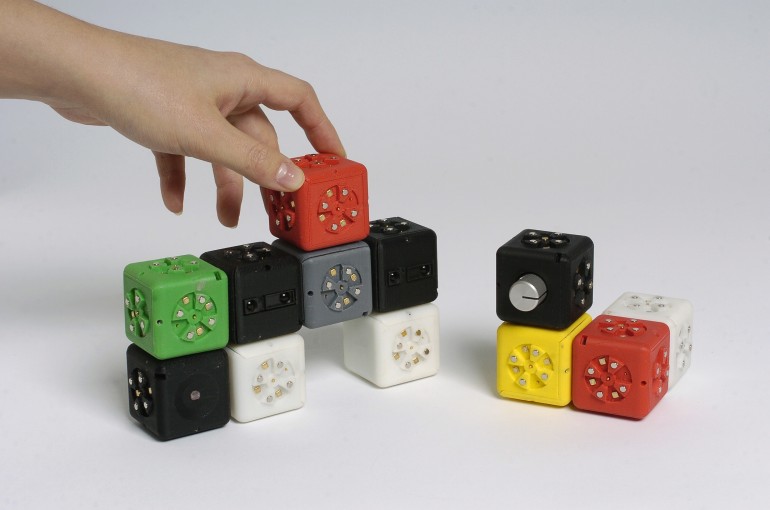 Kids these days are bloody lucky. Sure, kids’ cartoons are getting wimpier and more pathetic. But the toys! Oh man, the toys.

But now, lucky children of today will be getting Cubelets, robotic blocks used not for building words or igloos but robots – or robot igloos!

From Boulder, Colorado’s Modular Robotics, the Cubelets standard kit contains 20 magnetic blocks, each containing a computer with its own functions which is technically considered a robot in its own right. But when you snap a bunch of these robotic cubes together, they communicate amongst one another to build a limitless amount of robots with a limitless amount of behaviours.

“But instead of programming that behaviour,” says Modular Robotics, “you snap the cubelets together and watch the behaviour emerge like with a flock of birds or a swarm of bees.” 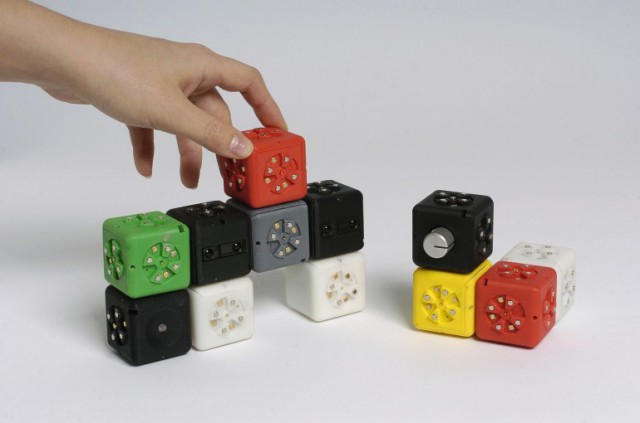 Graceful, yet dangerous, no?

The kit comes with a combination of action, sense and think/utility blocks, and when combined, can create a robot that drives faster depending on the temperature and stops for oncoming objects, for example.

So what exactly is included?

“Each block communicates with its neighbours, so you know that if two blocks are next to each other, they’re talking,” they say. “If you make a simple robot by connecting a Light Sensor block to a Speaker block, they’ll start to talk, and when the light in the room gets brighter, the Speaker will get louder. Actually, you’d need a third block to make this work: every robot needs a Battery block to run. Next, you could swap the Speaker for a Drive block, and when the light gets brighter, the robot will drive faster. A third category of blocks is the Think Blocks: maybe you’d want to put an Inverse block in between the Light Sensor and Drive blocks. Then, the robot would drive slower as the light gets brighter.”

Cubelets are made for kids of 8 years and older, but I can imagine a lot of older hobbyists and geeks would get a kick out of the things. And if your crazy aunt buys a set for your 4-year-old, don’t worry. Citing the fact that eating or inhaling magnets can be fatal, as well as the Magnetix recall of ’06 and ’07, Modular Robotics says the magnets inside of Cubelets are not just glued in but mechanically attached so that they cannot fall out.

And they’re lead-free, unlike the paint on the wooden blocks of old.

Yup, kids today have it made.

The beta run of 100 standard kits is already sold out, but when new stock arrives in April, they’ll cost $300 through the Modular Robotics website.