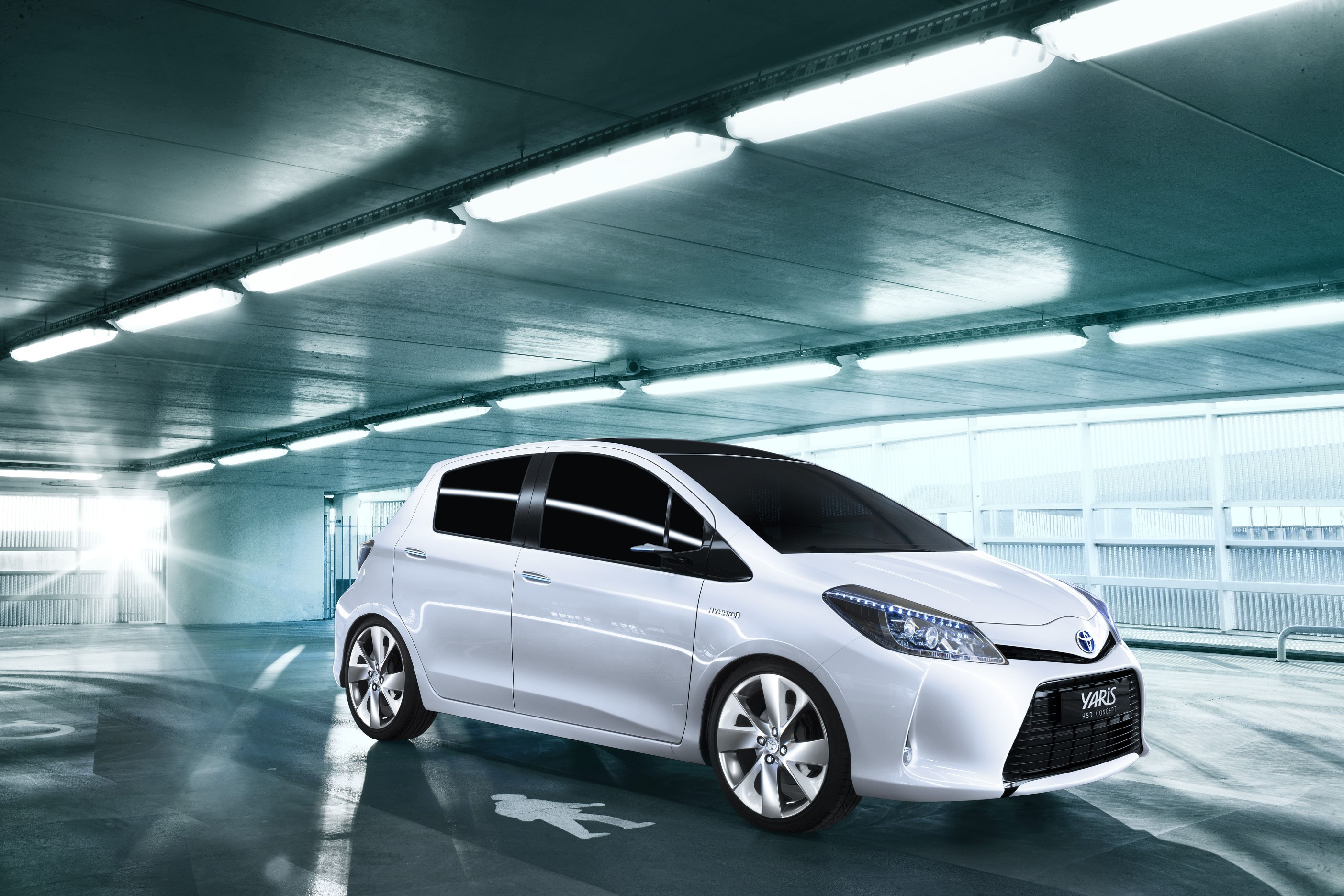 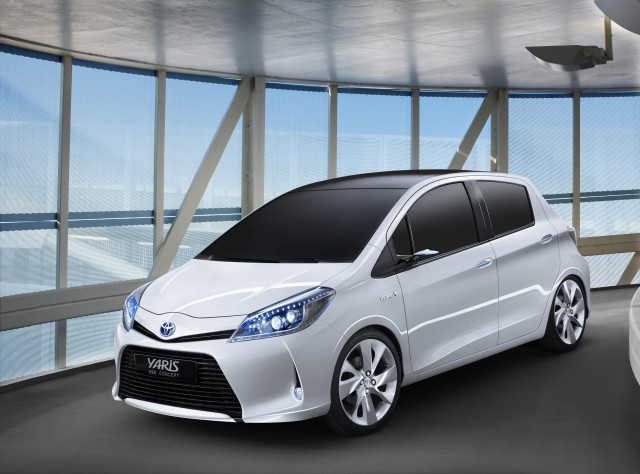 I guess today is Toyota Day. They’re already going full electric with a new EV Prototype and the hybrid thing is going bigger with the Prius+ MPV, but that’s not enough. Pretty soon, every car in a Toyota dealership will be either an EV or a hybrid and that trend is developing with the revealing of the Yaris HSD.

The HSD stands for Hybrid Synergy Drive, that whole “I’m saving the planet and I’m better than you” badge that shows up behind the Prius, Camry Hybrid, and other cars in Toyota’s lineup that do the whole gas plus electric thing. The Yaris HSD is supposed to predict “a new direction for the next Yaris” in terms of external design, but it’s still pretty much the same subcompact-looking hatch.

Further to the “save some gas, save the world” philosophy are some characteristic hybrid-specific design cues. You’ll find flat “aero” corners to minimize air turbulence, a large rear spoiler, and enlarged gaps in the massive 18-inch wheels to promote cooling. They’ve even put rear side view cameras in place of conventional mirrors.

Just because it’s small doesn’t mean that Toyota wants this to be a budget car; we already see this kind of thing in Japan, but not so much in North America. In any case, European production of the Yaris HSD is expecting to take off during the second half of 2012. To be fair, I like hot hatches, as they’re efficient, nimble, and inexpensive. Let’s just hope the hybridness doesn’t eliminate the fun factor.

The Yaris HSD concept makes its world debut at the Geneva motor show, marking an important step in the company’s strategy for rolling out full hybrid technology across its European model line-up.

Toyota’s goal is to offer full hybrid power in all its models in Europe as early as possible in the 2020s, a programme which began in 2010 with launch of Auris HSD in the C-segment. Yaris HSD will bring Hybrid Synergy Drive to the supermini B-segment, which accounts for the largest share of the European new car market.

The current growth of the B-segment is one aspect of a shift in public demand. Customers are becoming less brand-loyal, more open to products outside the mainstream and more receptive to new technologies.

There is also a significant increase in the number of customers who are making engine type their primary purchase consideration. Public perception of hybrid has matured to the point where it now ranks as a clear alternative to diesel or petrol engines.

The number of people choosing hybrid is increasing steadily and has doubled in the past two years. This has created a gateway to the Toyota brand: customers looking to buy a hybrid are three times more likely to consider a Toyota than those intending to purchase a conventional diesel or petrol car.

Toyota’s proven Hybrid Synergy Drive is aimed principally at demanding, urban customers who expect a new driving and ownership experience from their car. Delivering low fuel consumption, emissions and cost of ownership with relaxed and quiet performance, HSD proves that environmental responsibility and low running costs do not have to compromise driving pleasure.

Among the first Auris hybrid owners, the majority quote relaxation, an engaging driving experience and the learning of new driving habits as the most rewarding aspects of their new car.

Exterior design – a new direction for the next Yaris
The Yaris HSD concept inherits the clever packaging that has historically been a fundamental of element of Yaris, with a spacious and practical interior married to a more advanced and sophisticated exterior design.

The upper grille opening is shallow, flanked by highly contoured headlamps, promoting a smooth airflow over the upper body. The Toyota emblem is fully integrated into the front lip of the bonnet.

In profile, the car’s monoform shape is emphasised by a long, sweeping roofline and single, crisp character line running the length of the vehicle. Short front and rear overhangs and a long wheelbase maximise the room inside for passengers and luggage.

There are a number of styling cues that identify the car as a Toyota full hybrid. Flat, vertical ‘aero’ corners minimise air turbulence and house front foglamps and matching rear reflectors. Airflow is also managed by a large, integral rear spoiler, underbody covers and 18-inch aero wheels with enlarged gaps to promote cooling. Attention to detail extends to the aero-efficient shape of the door handles and rear side view cameras (featured in place of conventional door mirrors).

Every Toyota full hybrid comes with low cost of ownership built-in. The high fuel efficiency and low emissions save on fuel bills, attract tax benefits and inner city congestion charge exemptions and keep running costs down. Moreover, Hybrid Synergy Drive is designed for low maintenance requirements and hard-wearing performance. The system has no starter motor or alternator, the timing chain is maintenance-free and there are no drive belts, which improves reliability and saves on upkeep bills.

HSD powertrain downsizing – the engineering challenge
Introducing full hybrid technology to the B-segment has presented Toyota with some unique engineering challenges. The powertrain design has to be tailored for installation within Yaris’s compact and extremely efficient packaging, without compromising its quality and performance, or detracting from the passenger accommodation and loadspace. Success in this task is essential to meet the growing demand for urban-friendly family vehicles, in which space and the benefits of hybrid performance are prime requirements.

European production
The production model which will follow the Yaris HSD concept will be launched throughout Europe during the second half of 2012. Cars will be built at Toyota Motor Manufacturing France’s Valenciennes plant.

Full hybrid technology will become an increasingly significant part of Toyota’s mainstream vehicle production in Europe. With Auris hybrid already being built at Burnaston in the UK, Toyota is the only car manufacturer to be producing hybrid vehicles at more than one European factory.