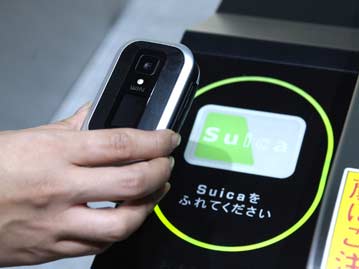 ven though the new payment system at Starbucks is based on a barcode scanner, near field communications (NFC) will really represent the future of mobile payment. And RIM wants to be all over this thing.

Stephen Bates, RIM’s Managing Director in the UK, has boldly proclaimed that “all of our new devices moving forward” will have NFC tech built into them. This goes into everything from entry-level Pearls to top-end Torches and Bolds.

I can appreciate the convenience of this kind of tech. When I was over in Hong Kong, the Octopus card worked in much the same way. Just tap and go, quickly paying for everything from subway fares to sandwiches at 7-Eleven. Bates envisions the same, using a NFC-equipped ‘Berry to buy coffee at Starbucks and concert tickets at O2 Arena. He even expects NFC to replace Oyster cards (which are the same as Hong Kong’s Octopus cards).

That’s good news for the companies that manufacture NFC components. Get a few more big boys on board — HTC, Samsung, Apple — and NFC might finally break into the mainstream.